The overall team was split into three groups. In the Chiba-Falek lab, students investigated the role of APOE and its different isoforms in Alzheimer’s disease pathology by quantifying phenotypic differences between neurons, astrocytes, and microglial-like cells derived from human-induced pluripotent stem cells. Their model provided a strong and malleable system for evaluating novel therapeutic gene therapy approaches in the APOE gene, such as the one being developed in the Kantor lab.

In the Kantor lab, others focused on designing the molecular tools necessary to silence gene expression of APOE4, using CRISPR-Cas9 technology and lentiviral vectors. Their results suggest that we were able to achieve successful downregulation of APOE4.

In the Science and Society program component with Dr. Angrist, students worked on tracing the development of earlier gene therapies in an effort to explore the future challenges associated with finding a disease modifying treatment for AD (a DMT seeks to stop or slow the progression of the disease by making alterations to the pathological steps that lead to the disease). 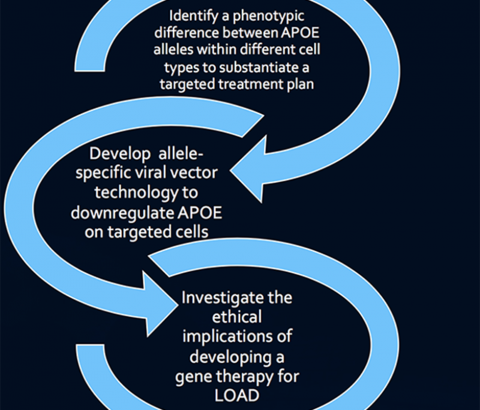