Our team consists of three distinct, yet intertwined, interdisciplinary groups.

In the Chiba-Falek lab, under the Division of Translational Brain Sciences, Department of Neurology in the Duke University School of Medicine, we have been investigating the role of APOE and its different isoforms in Alzheimer’s disease pathology by quantifying phenotypic differences between neurons, astrocytes, and microglial-like cells derived from human-induced pluripotent stem cells. Our hiPSC-derived model has been able to substantiate phenotypic differences between APOE ε2, ε3, and ε4 hiPSC-derived cells, suggesting a role of APOE in the maintenance of the nuclear envelope integrity that may lead to alterations in the cell homeostasis and cause neuronal loss. Overall, our model has been able to provide a strong and malleable system for evaluating novel therapeutic gene therapy approaches in the APOE gene, such as the one being developed in the Kantor lab.

In the Duke School of Medicine, Department of Neurobiology, the Kantor lab focused on designing the molecular tools necessary to silence gene expression of APOE4, using CRISPR-Cas9 technology and lentiviral vectors. We first designed a series of vectors containing small guide RNAs (which would guide our vector to the APOE promoter) and DNMT3A (an enzyme used to control levels of protein production by adding chemical tags to the DNA, acting to repress transcription). Next, we evaluated the efficacy of our design by running experiments using HEPG2 cells (a stepping stone to more complex model systems), to determine if we would be able to successfully limit protein production in cells infected with our plasmid. Our results suggest that we were able to achieve successful downregulation of APOE4. Moving forward, we plan to further validate our system by repeating these experiments using neural progenitor cells, and explore new ways to refine the specificity of our vector.

In the Science and Society program component with Dr. Angrist, we worked on tracing the development of earlier gene therapies in an effort to explore the future challenges associated with finding a disease modifying treatment for AD (a DMT seeks to stop or slow the progression of the disease by making alterations to the pathological steps that lead to the disease). Additionally, we emphasized the importance of beginning to take action and reimagine healthcare delivery in order to address issues such as pricing, cost, treatment, and patient stratification now, rather than waiting until a successful DMT becomes a reality.

Challenges we encountered as a group included compiling the background knowledge necessary to grasp a thorough comprehension of Alzheimer’s disease itself, in addition to the specifics of the specialized areas of research each team member contributed to the project. We also encountered various issues with troubleshooting during data collection. Moreover, because there is very little pre-existing literature regarding a DMT for AD, it became necessary to pioneer an understanding of a future DMT for AD.

Successes of the group included our ability to integrate the three individual portions of our project towards our common goal of ultimately combating the increasingly common issue of AD through the successful implementation of a DMT for late-onset Alzheimer’s. Frequent group presentations and joint lab meetings enabled us to better understand each other’s unique areas of focus, and increased our appreciation of the integral relationship between science and policy, knowing that one cannot exist in a vacuum without the other. 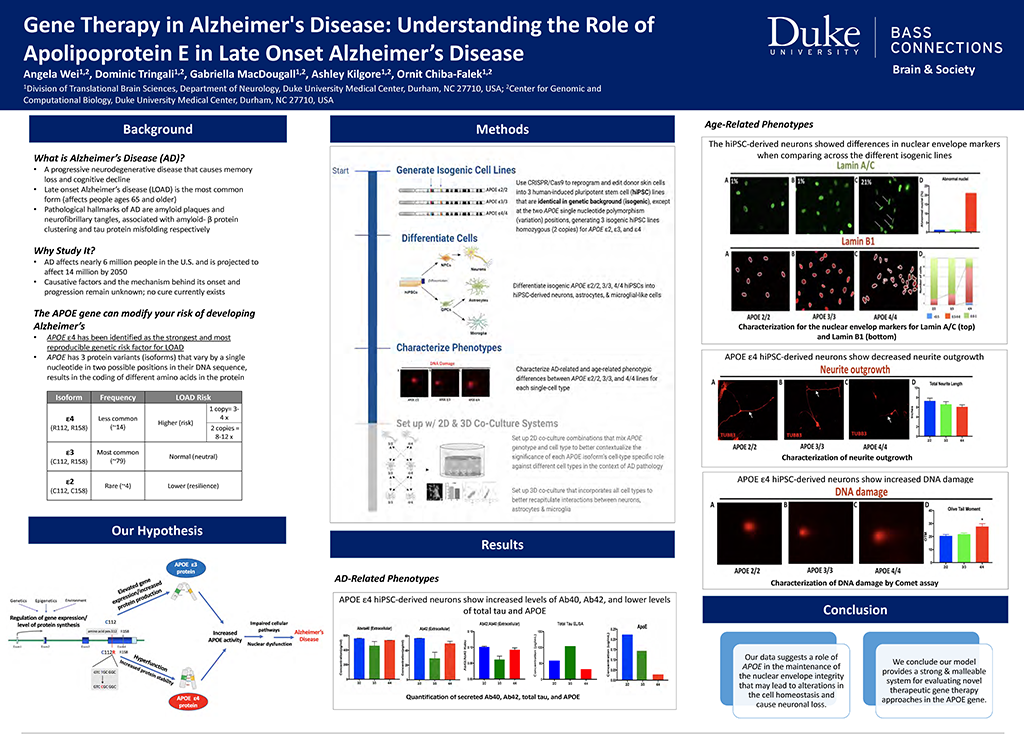 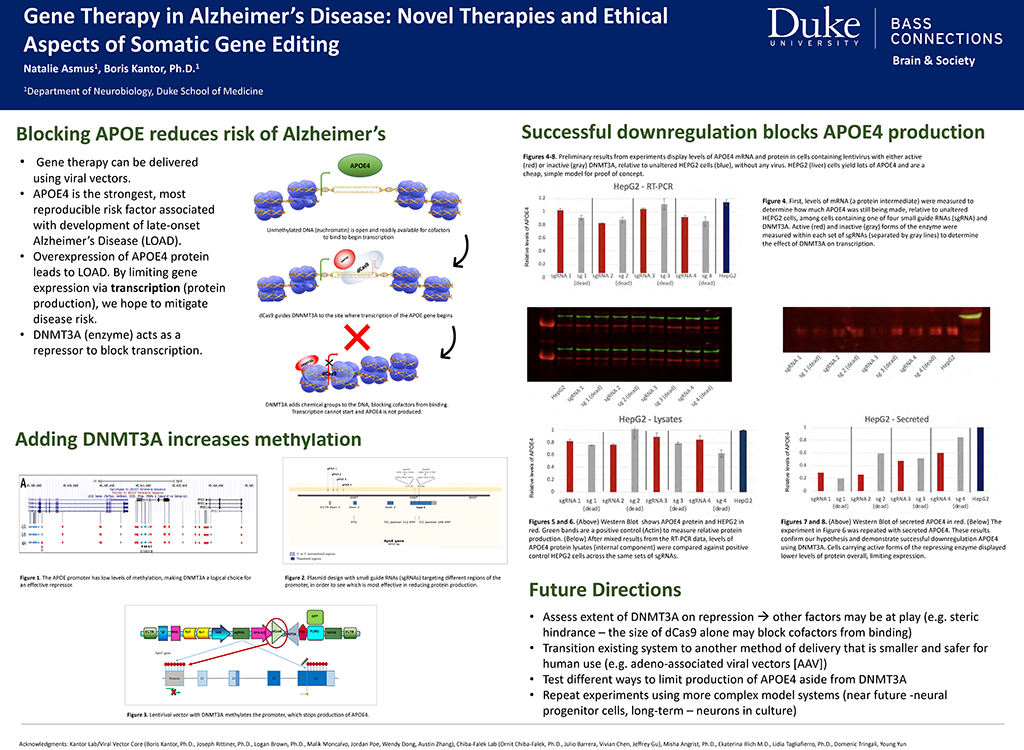 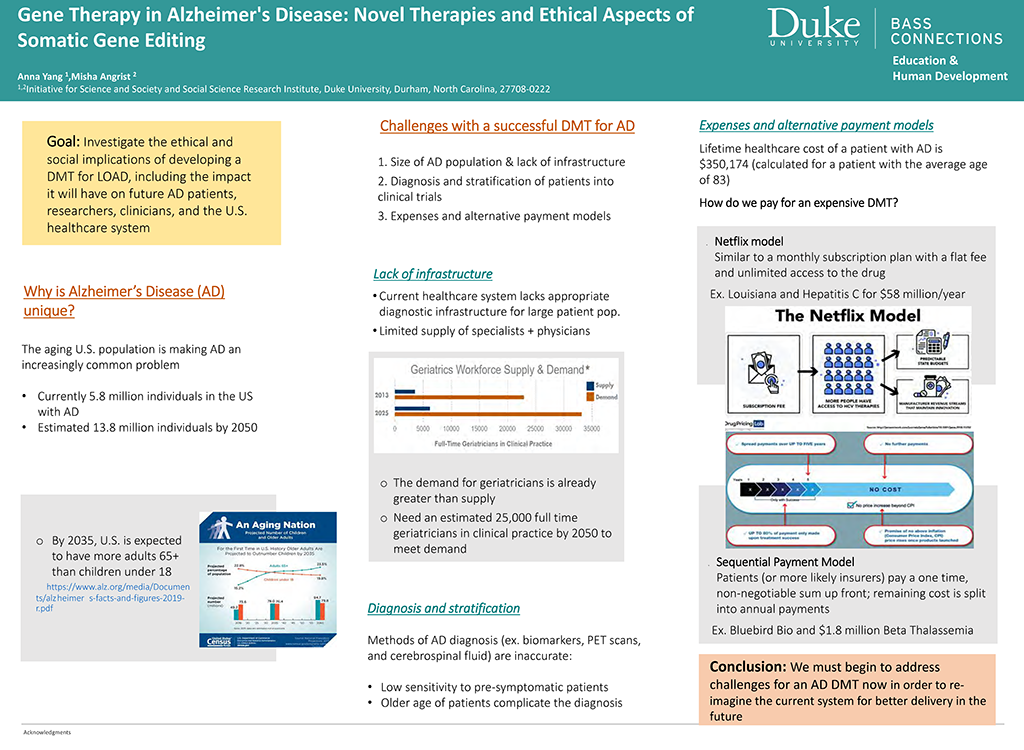 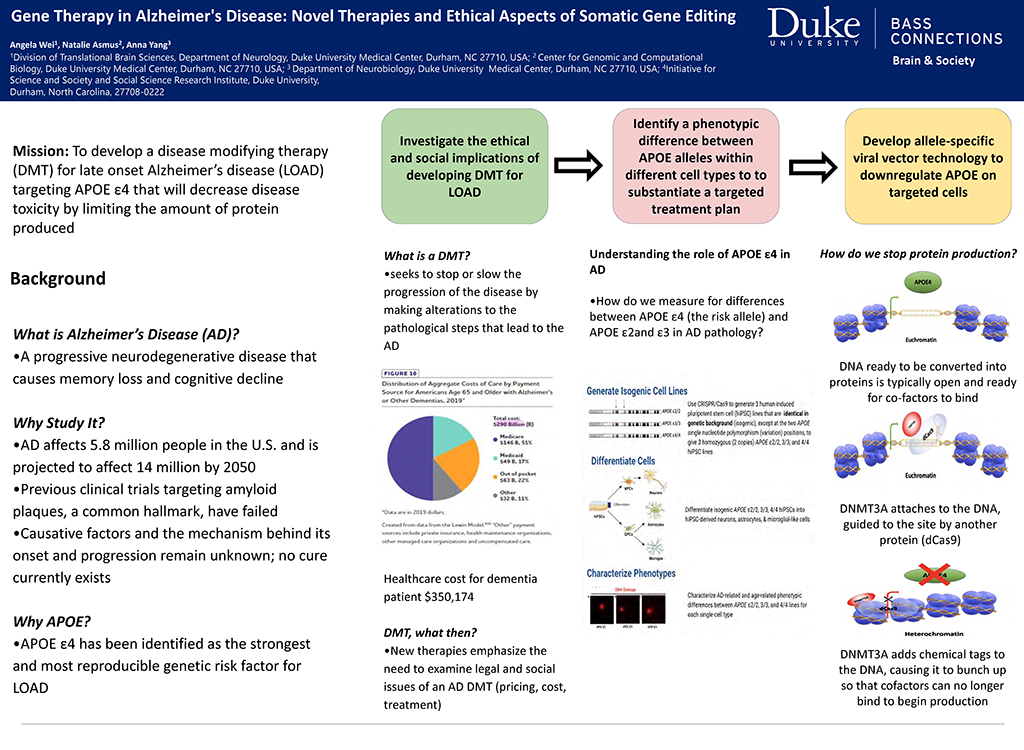