Creative Industries and the Urban Environment (2017-2018)

The term creative or cultural industries refers to industries that combine the creation, production and commercialization of creative contents that are intangible and cultural in nature. Over the past ten years, Durham has witnessed a boom in a number of key cultural initiatives including the Durham Performing Arts Center and Golden Belt, among others. These have not only enriched the city’s image but have also attracted other creative ventures, and are often seen as triggers for the local economy.

This Bass Connections project examined the relationship between urban development and cultural production in specific contemporary and historical contexts, then zoomed in to focus on Durham. Team members collected and analyzed data on the economic impact of the so-called creative class, as defined by urbanist Richard Florida. Digging into housing values, labor economics, the impact of Spanish-speaking communities, the role of tolerance and diversity in economic development and other topics, they produced five working papers that are being compiled into a published volume of articles. To share findings with the community, they have begun planning a local exhibition in partnership with Durham city government.

Durham’s Creative Economy: Mapping the Arts, Creative Industries and the Creative Class in a Time of Rapid Urban Growth (manuscript by Laura Ritchie and Gentry Fitch)

Dollars in Durham: A First Glance at the Labor Economics of the Creative Class in Durham from 2005-2016 (manuscript by Jonathan Chapman and Jessica Chen)

Creative Industries and the Urban Environment

These Ph.D. Graduates Leveraged Bass Connections and Other Interdisciplinary Opportunities

As Arts and Culture Flourish in Durham, Students Assess the Economic Impact 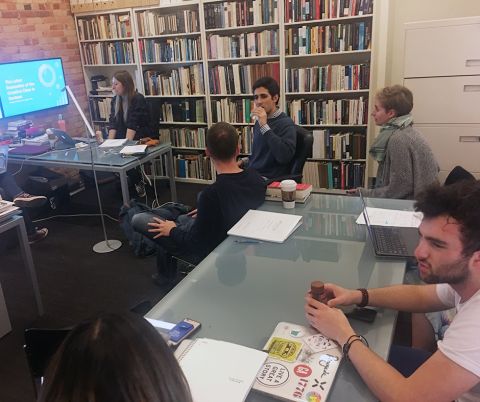