In current culture, people usually discuss controversial moral and political issues only among like-minded people who do not press challenging questions. In fact, calling on people to justify their moral, political and religious views, especially in contexts where others might disagree, is widely regarded as impolite, even insulting.

However, evidence suggests that people who are regularly called upon to answer the right kinds of questions will exhibit greater intellectual humility and will be more likely to participate constructively in public discussions.

This project team identified a range of questions about effects of and reasons for policies as well as about causes of one’s beliefs in order to investigate which of these questions increase humility and which raise barriers to constructive discourse, such as defensiveness, rationalization and polarization.

The team’s goal was to test the hypothesis that, if students are trained in a culture that encourages people to regularly ask themselves and others the right questions, then they will become better at understanding their own or others’ points of view and, hence, at navigating an ideologically diverse world.

The team use MTurk to reach a large and diverse population as well as in-person surveys on campus and in the community (including at the North Carolina state fair) to provide confirmation of results and develop a battery of questions through which people can learn to engage thoughtfully and critically with diverse perspectives.

Team members also visited the Right Questions Institute, consulted with the SAGE Center for the Study of Mind and attende the Humility & Conviction in Public Life conference in Hartford, CT, in April 2018.

Research on Empathy Inspires Ph.D. Student to Think Outside the “Humanities Box”

De-Polarization and Empathy – There’s an App for That!

Seeking Change in How We Talk Politics

This project team was originally part of the Education & Human Development theme of Bass Connections, which ended in 2022. See related team, How to Cure Political Polarization by Asking Questions (2018-2019) 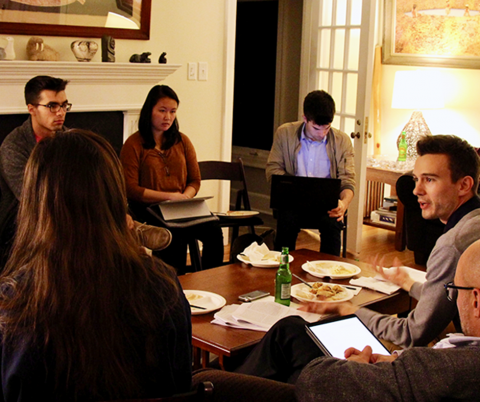