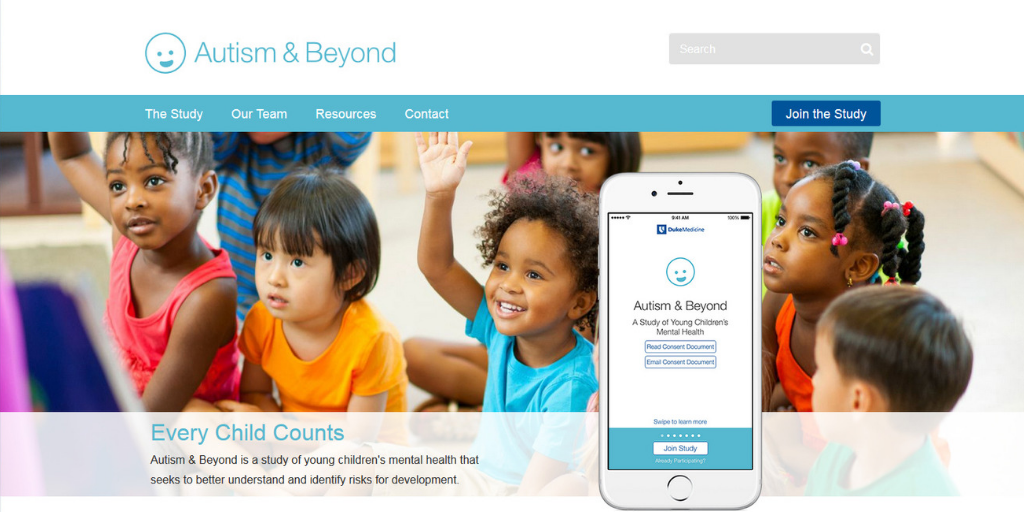 A Bass Connections team took part in an important collaboration among researchers at Duke University and Duke Medical Center. Launched in 2015, a free autism screening app called Autism & Beyond invited the public to take part in a study to screen young children for signs of autism. Using the app, which was designed using Apple ResearchKit, an open source software framework designed to help medical researchers gather data, parents completed consent forms and survey questions and then used their phone’s camera to record their children’s reactions while they watch videos designed to elicit autism risk behaviors, such as patterns of emotion and attention, on the device’s screen.

When I arrived at Duke, I wanted to develop relationships with people across campus, not just in the School of Medicine. [In this project] we partnered with folks from Engineering and Duke Primary Care; we had a medical student, and undergrads and grad students from Computer Science and Engineering as well as Psychology and Neuroscience, and we implemented the app in a primary care setting. This led to several published papers. We’ve developed a new screening app, and we’ll be validating this with an NIH grant. –Geraldine Dawson, Professor of Psychiatry & Behavioral Sciences; Director, Duke Center for Autism & Brain Development

A 2018 Duke study found that the app is easy to use, welcomed by caregivers and produced reliable scientific data. These findings point the way to broader, easier access to screening for autism and other neurodevelopmental disorders – conclusions that suggest an app-based approach could be a better means through which to reach underserved areas and track an individual child’s developmental changes over time.

In one year, more than 10,000 people downloaded the app, and 1,756 families with children aged one to six years participated in the study. Parents completed 5,618 surveys and uploaded 4,441 videos. Usable data were collected on 88% of the uploaded videos, demonstrating the feasibility of this type of tool for observing and coding behavior in natural environments.

In 2017, Duke received a related five-year $12.5 million grant from the National Institutes of Health to study connections between autism and attention deficit and hyperactivity disorder (ADHD). The grant will allow Duke researchers to validate a new version of the app for autism and ADHD screening.