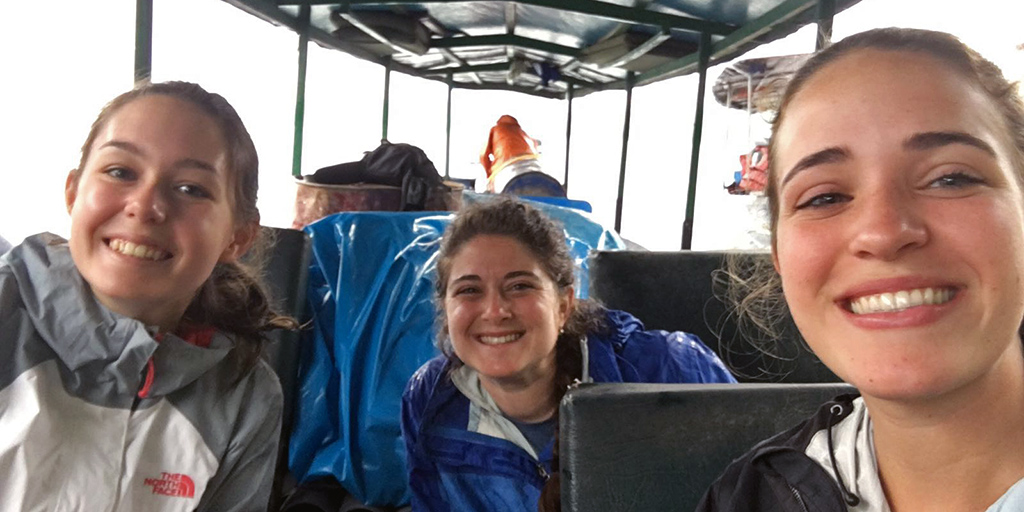 It is one of our many trips along the Madre de Dios River in the Peruvian Amazon where we sit comfortably on our seats, shielding our bodies from the wind with a plastic tarp and searching for birds and wildlife as our boat chugs slowly downstream. But it’s not just birds and wildlife that we’re seeing – we also see mining setup after mining setup, evidence of the illegal artisanal and small-scale gold mining activity occurring here.

On this particular trip, we decide to count the number of small mining operations along the shore. There are certain segments of the river, like the Manu, that are more heavily protected and isolated, where we see no setups at all; however, as we near the mining and transportation hub of Boca Colorado, they surround us.

Each individual [mining] setup displaces a small mountain of sediment from the river bottom.

In our 250-kilometer stretch of this one river, we count 120 separate active mining operations. Each individual setup displaces a small mountain of sediment from the river bottom and can extract 20-30 grams of gold in just 24 hours. From this, the miners can expect a small fortune much larger that the income they’d receive in their hometowns from the rest of the year of farming. 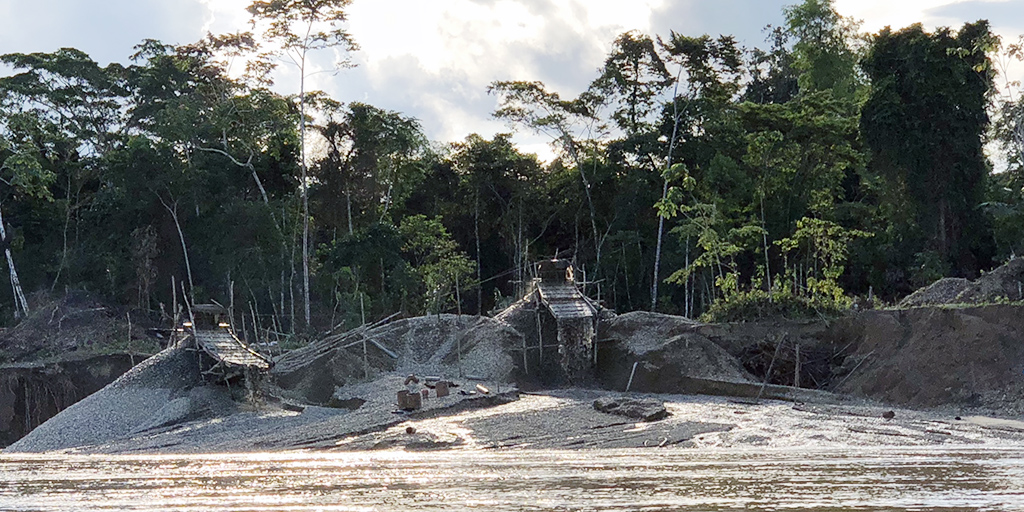 To extract the gold, the miners use about a 2:1 ratio of mercury to gold. As we understand, the mines operate all day for four consecutive months (122 days) during Peru’s dry season. From the information we have gathered so far, we are able to roughly estimate the amount of mercury released into the environment from this small portion of the river. Our result: 880 kilograms of mercury – or the weight of a giraffe.

Based solely on what we’ve seen in this week-long journey down the Madre de Dios River, we estimate 880 kilograms of mercury are being released in a four-month span by artisanal and small-scale gold miners in this 250-kilometer section of an almost 700-kilometer river.

Our calculation offers a glimpse into the spread and detrimental results of mining that are devastating the landscape with mercury pollution.

This stretch of river does not have the highest density of mining operations, nor is it the only river with gold mining occurring along it. Though it is not known how much mining occurs in the rest of the region, our calculation offers a glimpse into the spread and detrimental results of mining that are devastating the landscape with mercury pollution. Just imagine how much higher the result of mercury would be if the calculation encompassed the entirety of the river and all artisanal and small-scale gold mining setups.

So, how is so much mercury (a potent neurotoxin dangerous to both animals and humans) released into the environment, and what are the implications?

To answer, first you should understand what artisanal and small-scale gold mining, known as ASGM, is and who is involved. ASGM is used in mostly rural communities in developing countries around the world, with Peru containing some of the highest amounts of ASGM globally. In this industry, the miners are independently employed, use their own resources and are not professionally trained because it is completely illegal.

Mercury can still be acquired quite easily and cheaply on the black market.

Even though the Minamata Convention banned the extraction of mercury worldwide, mercury can still be acquired quite easily and cheaply on the black market. For this reason and the fact that gold is a primary export, gold mining is a large part of the economy which employs people all around the Amazonian region. Over time, its presence and impacts have become widespread. 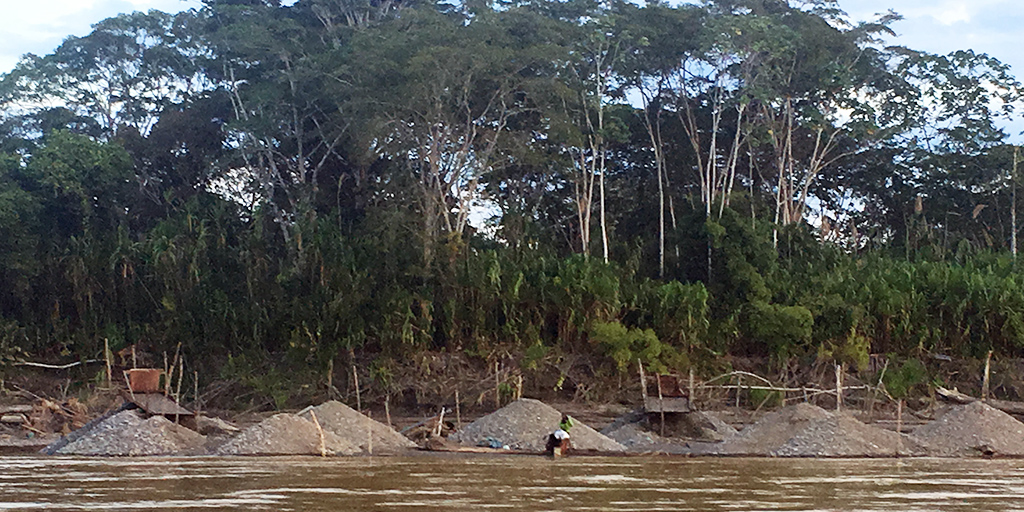 In certain areas of the river where we travel, you can’t go more than five minutes by boat without seeing at least one mining setup. These are rickety, hand-built apparatuses made with parts sold in just about every storefront of the mining towns we pass. The appearance, size, output and efficiency of each setup vary, but the components and mechanics are essentially the same.

In certain areas of the river where we travel, you can’t go more than five minutes by boat without seeing at least one mining setup.

The basic objective of the setup is to pump, using a diesel-burning engine, sediment and water from the river onto a contraption that separates the gold from the sediment. First, large rocks are removed from the sediment by directing the pump at a screen that allows only water and smaller sediment through its openings. Behind the screen is a piece of wood diverting water and sediment onto a long washboard-looking contraption, using a process known as gravity concentration. The wooden “washboard” is covered with a porous rug called a riffle that traps heavier sediment assumed to contain gold. The water, rocks and sediment that are not trapped by the riffle run off into the river and rapidly form large piles of mine tailings.

Miners want to ensure that every last bit of the gold is obtained, so generally more mercury is added than needed to extract the gold.

This process, which we can see clearly from the river, is followed by the removal of the riffle containing sediment and gold from the plank. The cloth riffle is then dunked into large repurposed oil drums and mercury is added to them. As we mentioned before, two grams of mercury is added to the mix per gram of gold retrieved. However, miners want to ensure that every last bit of the gold is obtained, so generally more mercury is added than needed to extract the gold.

Mercury binds to the gold in the sediment, creating a dense amalgam that can be easily fished out of the oil drum. The amalgams are then burned in one of the many gold-buying stores, which make up what seems like half the storefronts in the mining towns, to leave only a gold nugget. As for the rest of the sediment and elemental mercury left behind in the oil drums, it is dumped into the river and the process begins again.

So, where does the mercury go after it has fulfilled its use for the miners? That’s just the question we are asking! 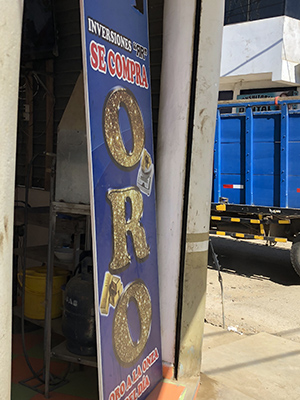 After the mining process, the mercury introduced ends up in soil, waterways and the air and can be transported and transformed numerous times as it is cycled. Some of the elemental mercury (quicksilver, the stuff found in old thermometers) is released back into the river and sediment at the end of the process. The rest of the mercury is burned off and enters the atmosphere.

The gold-buying stores normally have installed some form of chimney that takes the dangerous mercury-smoke out of the store, but the chimneys are no taller than the surrounding stores and homes, so the smoke often settles throughout the small towns before it is transported elsewhere.

The methylmercury is then absorbed by different organisms. It is especially dangerous because it has a long biological half-life and bioaccumulates in fish, which is a major source of food for local populations. As a result, top predator fish have high mercury content and humans eating these piscivorous (fish-eating) fish are exposed to large amounts of mercury through consumption, in addition to whatever amount they are inhaling from the gold shops.

Our investigation is fueled by the hope that our data collection and analysis can begin a conversation with the locals and aid in resolving their struggles and questions.

Often mercury ends up in the environment of unsuspecting residents who believe, as one woman in a non-mining community expressed to us, that they don’t have to worry about mercury because the mining isn’t on their part of the river. And even if mining occurred near them, where would the people go? What would they do? How would they make a living? These are complicated questions, which have been expressed to us and to which we don’t have the answers. Our investigation is fueled by the hope that our data collection and analysis can begin a conversation with the locals and aid in resolving their struggles and questions.