Faculty from all of Duke’s schools engage in Bass Connections, finding new avenues to collaborate with faculty and students from other schools on a range of research questions. Since 2013, 16 Law faculty have participated in the program, including eight faculty who have served on more than one team. Thirteen Law students, including two S.J.D. and 11 J.D. students, have taken part. Here are four examples of their involvement. 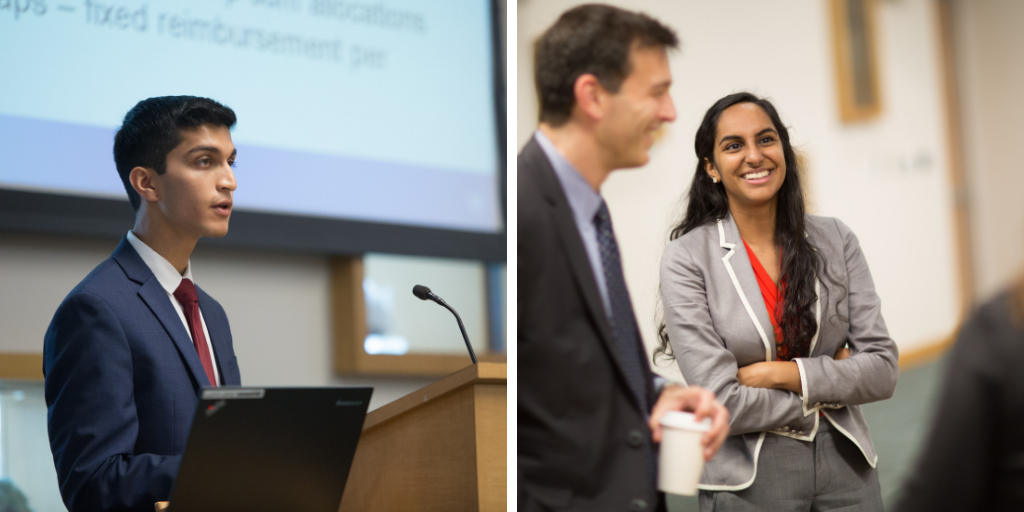 This 2016-2017 project team drew on Duke’s expertise in law, public policy, medicine, nursing and business to craft a Medicaid reform proposal that fits the constraints and demands of North Carolina politics. In April 2017, the team submitted its report to North Carolina policymakers and citizens and hosted a presentation and discussion in Raleigh.

Under Law Professor Barak Richman’s guidance, four undergraduates received a 2017-2018 Bass Connections Follow-on Student Research Award to identify health policy patterns and develop county-level case studies detailing the challenges in North Carolina healthcare. The smaller group has submitted its findings to the Department of Health and Human Services as the state seeks to improve rural access to healthcare and other Medicaid reform.

One undergraduate team member, Kushal Kadakia, won a Truman Scholarship and the Duke Faculty Scholar Award this year, and graduate student team member Madhu Vulimiri (M.P.P. ’18) was among the first cohort of Duke Margolis Scholars and accepted a position as senior Medicaid strategist at the North Carolina Department of Health and Human Services.

The healthcare policy world has been criticized for being insular, and its resistance to voices outside medicine has been blamed for many of its shortcomings. As an economist and a lawyer, I’m an outsider myself, but I knew that a deeply interdisciplinary team could develop a creative list of Medicaid reforms that a traditional medicine-oriented team could not. –Barak Richman, Edgar P. and Elizabeth C. Bartlett Professor of Law 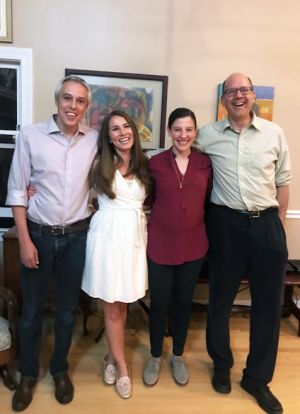 In 2015-2016, a Bass Connections project team studied the emerging efforts of government agencies throughout the world to evaluate the actual impacts of their regulatory policies. Through substantive case studies at the local, national and international levels, team members examined current practices and how to improve them. They conducted interviews in Washington with officials at several federal agencies and prepared a report on retrospective regulatory review.

Team member Daniel Ribeiro attended Duke Law as an S.J.D. student while on leave from Brazil’s Ministério Público (a fourth branch of government that can challenge government officials who do not live up to legal requirements). He completed a dissertation on adaptive regulatory impact assessment and coauthored a related article in the Journal of Land Use & Environmental Law.

Back in Brazil, my experience with Bass Connections is informing how I am building and leading teams of researchers and policy analysts at the Ministério Público. And I can’t have enough of the amazing opportunity of doing cutting-edge applied research! I am discussing participation in a future Bass Connections project, now as a member of my institution in Brazil and as a postdoctoral researcher from there. –Daniel Ribeiro, S.J.D ’18 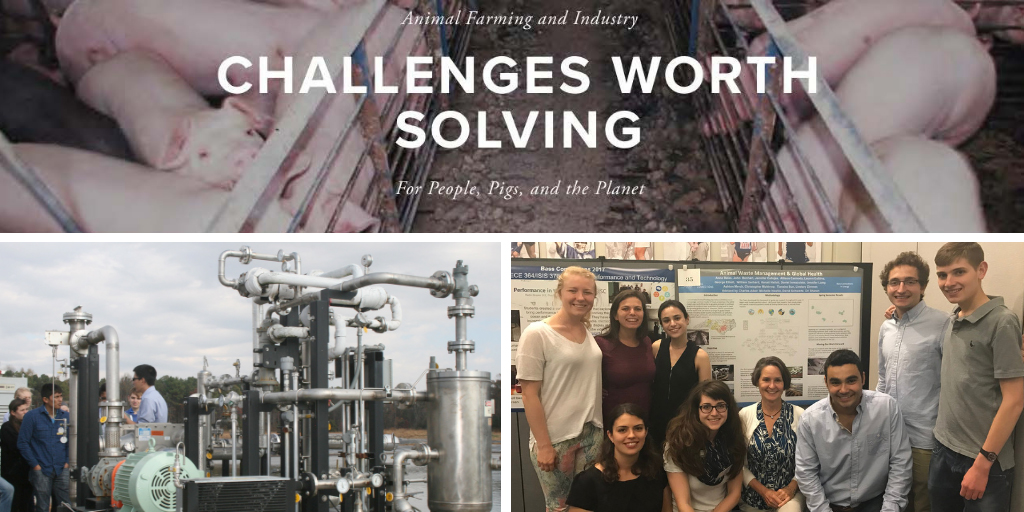 In 2016-17, Law Clinical Professor Michelle Nowlin and colleagues led a project team whose goal was to amplify the discussion around agriculture’s effects on global health and the environment. The team examined animal husbandry in five countries and did field research on North Carolina farms.

By studying policy abroad and practice at home, faculty and students developed a website that provides a comprehensive overview of sustainable animal waste management practices and healthier meat production processes.

These students are morally courageous. They were not just looking at PowerPoint slides or images on Google Earth. Confronting this out in the field – in its totality – allowed us to have a shared experience, identify solutions, and create meaningful impact. –Michelle Nowlin, Clinical Professor and Supervising Attorney at the Environmental Law and Policy Clinic 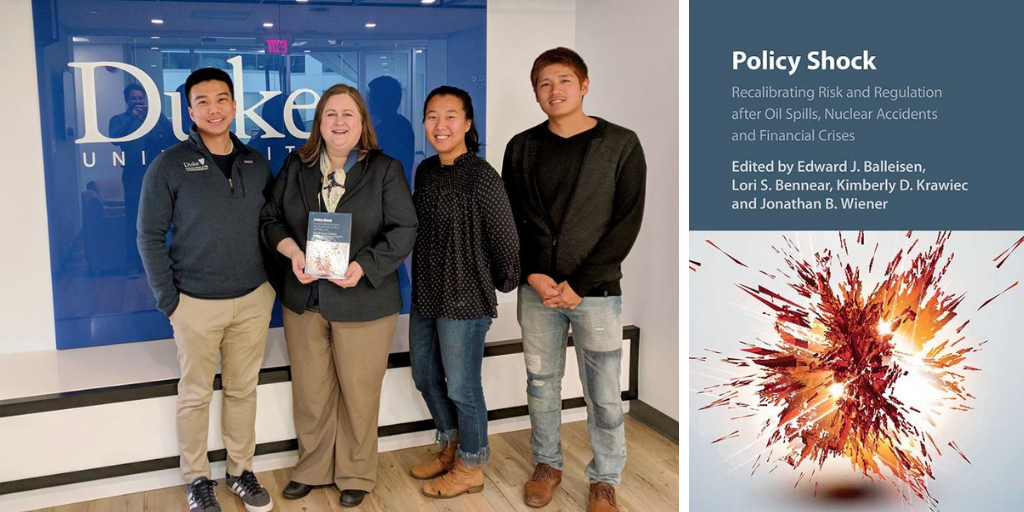 A deep-sea oil well has a blowout. A tsunami leads to meltdowns at a nuclear power plant. A bubble in the subprime mortgage market triggers a global financial crisis. What happens next?

A new book incorporating crucial research from a 2014-2015 Bass Connections project teamexamines how such crises reshape law and regulation, and how governments can learn from disaster.

Policy Shock: Recalibrating Risk and Regulation after Oil Spills, Nuclear Accidents and Financial Crises (Cambridge University Press, 2017) was edited by team leaders Edward Balleisen, Lori Bennear, Kimberly Krawiec and Jonathan Wiener. Students contributed to a key chapter in the book, drawing on their research on disaster investigation bodies, such as the National Transportation Safety Board and the Chemical Safety Board in the U.S., and examples from other countries, such as the Dutch Safety Board.

People often point to crisis events as leading to major regulatory action. And yet there was a need for research on how that actually occurs, and on the variety of different types of regulatory change that have followed crisis events. –Jonathan Wiener, William R. and Thomas L. Perkins Professor of Law

Photos: Kushal Kadakia and Madhu Vulimiri of the North Carolina Medicaid Reform team present to policy advisors and the public in Raleigh in April 2017; Daniel Ribeiro, Mercy Demenno, Anna Johns Hrom and Ed Balleisen of the Reviewing Retrospective Regulatory Review team pose for a photo in May 2018; Michelle Nowlin (kneeling center) and the Animal Waste Management and Global Health team gather in front of their poster at the Bass Connections Showcase in April 2017; Lori Bennear poses with a copy of Policy Shock and members of the Regulatory Disaster Scene Investigation team.