Remembering the Middle Passage brings together faculty, librarians, graduate and undergraduate students from five disciplines and three institutions to ask the question: How can we use digital tools to represent, and ultimately memorialize, the enslaved Africans who died during the Middle Passage?

Our work began in Fall 2019, on the 400th anniversary of the first slave voyage to present-day America, as part of a Bass Connections research project and graduate seminar convened by Charlotte Sussman. In our early meetings, we read and discussed primary and secondary literature related to the history of the transatlantic slave trade, questions of memorialization and racial justice, and digital humanities methodologies. Gradually, we came to appreciate the ways in which existing scholarship had used maps, databases, etc. to repurpose a troubled archive and tabulate the awful scope of the transatlantic slave trade. We wanted to expand on this work by taking a different approach—by using digital tools to highlight not the aggregate mortality of the Middle Passage but the personal and communal bonds severed by these deaths.

Our research led us to several ship logbooks which revealed the dates and times of deaths of enslaved persons along the Middle Passage. Using ArcGIS StoryMaps, we were able to precisely locate where those deaths occurred and create a visualization that disaggregated data that previously existed as vast numbers. 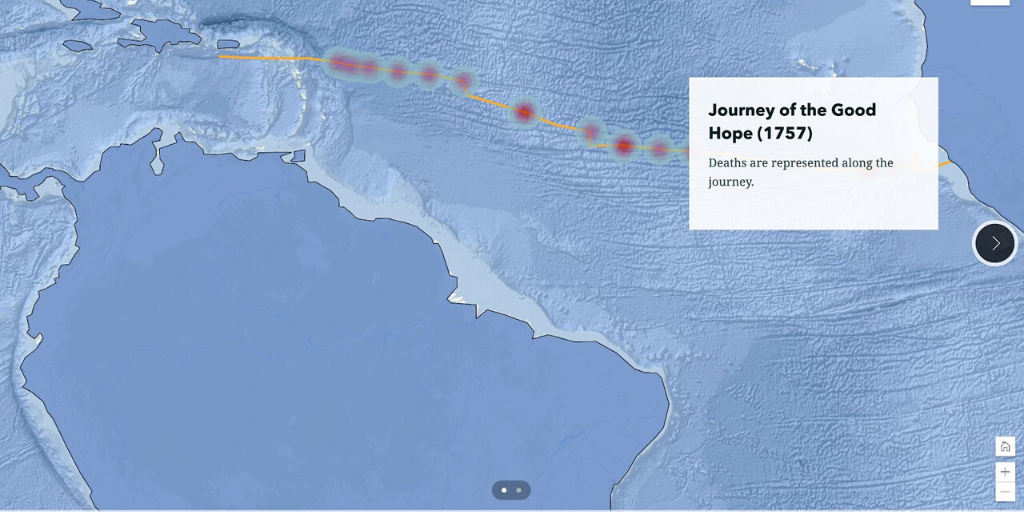 However, as humanists, we knew that merely visualizing the locations of these deaths would not sufficiently memorialize the lives lost. We drew on the practice of “critical fabulation,” as coined by scholar Saidiya Hartman, in order to craft an imagined history of one of the deaths aboard the ship, that of an unnamed child only known as “small boy.” 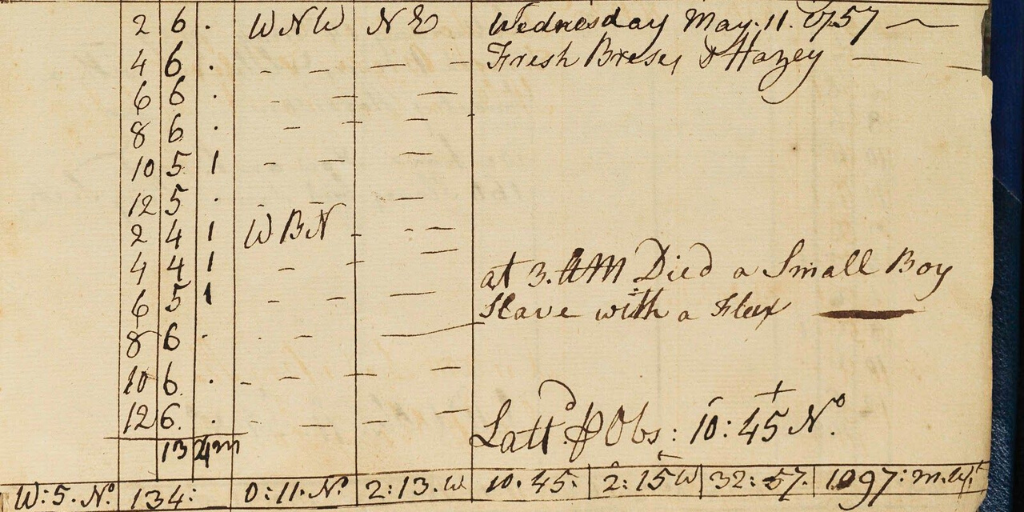 Our use of these complicated sources of knowledge required that we think deeply about the ethics of our project. We collaboratively wrote an “Acknowledgements” document in order to remind ourselves of our commitment to the lives of those lost in the Middle Passage.

We confronted many challenges when shaping the direction of the project. For instance, we had initially planned to cross-reference data from the Slave Voyages’ database and the Climatological Database for the World’s Oceans (CLIWOC). However, duplicate and unrelated data points meant that we could not match the data accurately across databases.

When working with the logbook of the Good Hope slave ship, we learned that the longitudinal and latitudinal coordinates were recorded using eighteenth-century ded reckoning. We sought the expertise of James Delgado, a maritime archeologist, to help us translate these coordinates into present-day mapping language.

Working through these challenges allowed us to develop a template for future research. As we continue to work on the project, we will be able to more efficiently translate logbook notations into mappable geocoordinates, and we will continue to use critical fabulation to explore the potential for liberation and life among a deliberately opaque archive. The next voyage we map will be the Mermaid. Several papers related to this voyage are housed in Duke’s archives, and they detail an insurrection by enslaved Africans on board. Studying this event will unearth and highlight methods of resistance and rebellion by enslaved persons.

In the coming year, we aim to build on this work with an upcoming conference, community engagement events, and research regarding local connections to the Middle Passage that can be included in our mapping work. We will also develop a series of teaching guides that may be used to integrate our research into high school curricula. Our work will be supported by a Bass Connections Student Research Award.