Investigating Substance Use, Mental Illness and Recidivism in Durham

Addressing the connections between health and the justice system in Durham county is critical to strengthen our community. People living with behavioral health diagnoses of serious mental illness (SMI) and substance use disorder (SUD) are overrepresented in United States jail systems. We continue to have the privilege of collaborating with and learning from the Criminal Justice Resource Center (CJRC), the Durham Crisis Intervention Team Collaborative, the Stepping Up Initiative, the Durham County Detention Facility, Duke Health, and the Lincoln Community Health Center. By leveraging data from both DCDF and the health systems, we hope that our work can begin to facilitate a partnership to better serve the justice-involved population.

Our team was really interested in asking the question: What are the connections between substance use, mental illness, and recidivism?

We began our work in Summer 2020 as a part of the Data+ summer team. Please see our poster for a summary of our work.

To start investigating our research question, during Summer 2020, we focused on gaining a deep understanding of our dataset and study population. We also prepared our datasets for upcoming data analysis. Our team had a great time participating in a book club, where we read and discussed Issa Kohler-Hausmann’s 2018 book Misdemeanorland: Criminal Courts and Social Control in an Age of Broken Windows Policing. After looking at descriptive statistics, we were intrigued by the diverse categorizations of serious mental illness used by the jail and the health systems.

Over the Fall 2020 semester, we dug deeper into how serious mental illness is captured across our data. We finalized the datasets for analysis and began individual data analysis projects. We found that substance use disorder is more strongly associated with higher rates of recidivism compared to serious mental illness diagnoses.

The team was interested to find that the serious mental illness indicator captures different illnesses in the group of individuals in the DCDF with the jail-applied “Mental Health tag” compared to the group without the Mental Health Tag.

We also worked on understanding opioid overdose after jail release and found evidence of a critical time during the first two weeks after release from the DCDF in which there is a heightened risk for opioid overdose.

Expanding these projects in the Spring 2021 semester, the team worked toward journal publication of three papers. Please see these summary slides of our work. 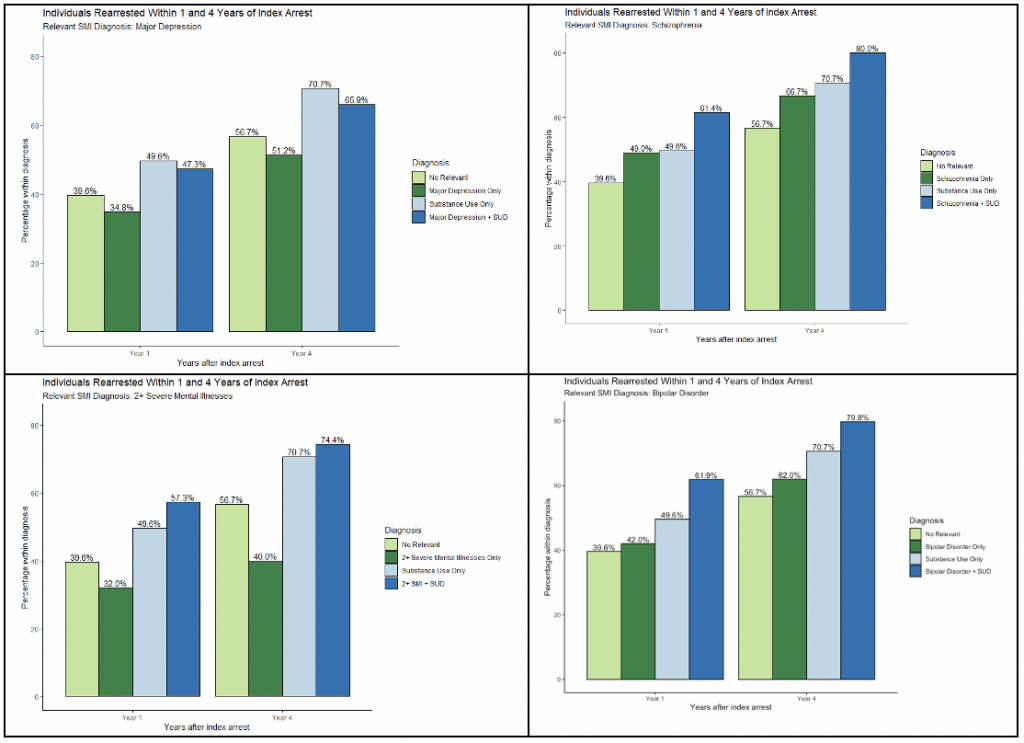 Overall, individuals with serious mental illness tended to have the lowest recidivism rate. However, when we separated the serious mental illness diagnosis into the three separate diagnoses, we found that disorders with externalizing symptoms (schizophrenia and bipolar disorder) tend to have a higher recidivism rate than the no relevant diagnoses group, whereas disorders with internalizing symptoms (major depressive disorder) remains lowest. These findings encourage the development of efforts that focus on more complex behavioral health labels when addressing mental illness in the justice system.

Moving forward, we are working on two more papers that branch off of these findings. This work will also be continued in Summer 2021 as part of another Data+ team and a 2021-2022 Bass Connections project team.