Alumni Spotlight: Collaborative Research at the Intersection of Neuroscience and Ethics

It’s 5:00 a.m. and campus is still quiet except for a lone student who hurries through the Chapel Quad, making her way from her sleepy dorm to Duke Medical School located on the other side of campus. Research starts early for Kelsey Graywill, a member of a long-running Bass Connections team whose work designing interventions to improve neurosurgery patient outcomes in Uganda started at the crack of dawn on a corner of campus that only a small fraction of Duke undergraduates get to experience.

“My phone’s lock screen is still the picture that I took from outside my dorm window on my way to this early Bass Connections meeting,” Graywill reminisced. “That was the first time in my Duke career when I felt like I was really able to do the kind of thing that I wanted, which was very meaningful for me.” She graduated in 2018.

If Graywill’s self-designed major titled “Human Creativity: Evolutionary Neuroaesthetics” focused on the intersection of brain science and aesthetics, how did she end up trekking across campus to collaborate on research to improve neurosurgical patient outcomes in Uganda? It turns out, exploring projects and figuring out how they fit together is basically Graywill’s superpower.

After conducting research in cognitive neuroscience as a first-year student, Graywill began searching for interdisciplinary projects that would enable her to conduct research at the intersection of multiple disciplines and prepare her for medical school.

“I looked into a few Bass Connections projects and found one that worked on various kinds of health behavior initiatives in a neurosurgery ward at a hospital in Kampala, Uganda,” Graywill said. “This project had so much overlap with work that I wanted to do as a physician. As an undergrad, I thought I was going to have to wait until I’m in medical school to be able to get involved in this kind of research!”

“Our team was a part of the larger Duke Global Neurosurgery and Neurology (DGNN) group that consists primarily of health care providers at the Duke Hospital and conducts research in partnership with Mulago National Referral Hospital (MNRH) in Kampala,” Graywill explained.

The project had three unique but interrelated subteams that helped address mortality rates in the neurosurgery ward in Kampala, with three students working in each group. Graywill’s subteam addressed health, hygiene, behavior and sanitization on the ward, working with their faculty mentor and local partners to collect data, design interventions, execute the initiatives and measure the results.

“In such a small subteam, we were all very hands-on and involved,” Graywill said.

While team members spent most of their time working intensively within their subteam, all students still had plenty of opportunities to bond with their full team by attending team meetings, listening to guest lectures by practicing physicians, and most importantly, traveling to Mulago Hospital in Uganda to collect data on the ground and test their designed interventions.

“Every day we would go into the neurosurgery ward to do data collection. For my group, that involved making maps of the places in the ward where we observed different types of health hygiene,” Graywill explained. 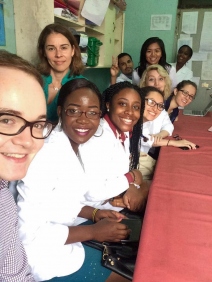 Team members would map the places where people were washing their hands or where there might have been infection control issues. For instance, many family members acting as caretakers had to live in the neurosurgery ward with the patients and sleep underneath their beds to care for them during the day as a way to reduce the workload of the nurses. Students would observe these interactions and examine how they might affect mortality rates in the ward, either through infection transfer or other hygiene behavior.

The premise of the research was to find out why the mortality rate in the neurosurgery ward remained high despite a very successful “twinning” program between Duke Neurosurgery and MNRH that provided the Ugandan surgeons with equipment and training.

“The underlying issue was the lack of compliance with medication from the patients and inadequate family and caregiver education, especially since the families spent so much time caring for the patients,” Graywill shared. “There were also issues with infections on the ward, so the goal of our team was to address this issue.”

One of the interventions students designed was to install hand sanitizer pumps in different places in the ward and measure how people were using them and whether they were sanitizing their hands before or after contacting patients. After a month of data collection, the team came back to Duke and spent the entire academic year analyzing which interventions were most effective in reducing the mortality rates.

Coming from Duke University to Uganda, team members had to carefully navigate the existing power structures and the challenges of conducting research in a foreign country.

“There are a lot of ethical considerations that you have to make when you’re partnering with a community to do research,” Graywill explained. “All the students on our team had different interests, which definitely challenged us in terms of our growth as researchers because we had to figure out among each other how we were going to navigate the ethics of doing this kind of research.”

[While in Uganda], we didn’t do a lot of touristy stuff. A lot of that was because our mentor didn’t believe that if we were going to be there to do work, to do research, we should be going off and using [this experience] to be tourists. He instilled in us the mindset that if we’re here to do work and collaborate, we should not be self-serving.

Graywill’s mentor and team leader Anthony Fuller (assistant professor of neurosurgery) lived with the students when they were in Kampala, often offering helpful advice about working with patients as well as the politics and ethics of community-engaged research.

“[While in Uganda], we didn’t do a lot of touristy stuff. A lot of that was because our mentor didn’t believe that if we were going to be there to do work, to do research, we should be going off and using [this experience] to be tourists. He instilled in us the mindset that if we’re here to do work and collaborate, we should not be self-serving.”

“Even now, I’ve reached out to [Professor Fuller] and he’s given me advice on what my next steps for medical school should be,” said Graywill, who did a master’s program at Goldsmiths, University of London, after Duke. “That’s four years since I graduated and five years since I was participating in his Bass Connections project.”

According to Graywill, it isn’t always easy to find a good mentor, so she is grateful that the university tries to help students find and connect with faculty mentors through programs like Bass Connections.

“Professor Fuller was one of my best mentors, and I’m extremely lucky to have had my project team experience,” Graywill said. “He took a personal interest in each of the students on our team and was an advocate for every single one of us.”

In the end, those early mornings with her research team formed lasting bonds and became a core part of her Duke research experience.

Duke University senior Milena Ozernova is a Bass Connections communications assistant majoring in political science. Milena loves to travel around the world, write articles on the issues that matter to her and the student community, and take photographs of street cats.