Gerrymandering and the Extent of Democracy in America (2018-2019)

Gerrymandering has been present in our democracy since the early 19th century. Courts have struck down district maps that clearly disadvantage racial minorities, but they have often declined to intervene in cases where maps intentionally favor a political party, in part because they lack a credible way of assessing such claims.

In 2012, Math professor Jonathan Mattingly watched this dynamic play out in North Carolina, where Republicans won nine of the 13 seats for the U.S. House of Representatives, even though Democrats received 51% of the votes. Interested in exploring gerrymandering, Mattingly partnered with an undergraduate on a summer research project. Using votes cast in the 2012 election to evaluate hundreds of alternative district maps, they were unable to find a single map that led to the same outcome.

A series of Data+ summer teams in 2015 and 2018 extended the analysis to other states, and several external partners joined the effort. In 2018-2019, this project team compared districting plans across states, analyzed the effectiveness of statistical tests currently used to detect gerrymandering and finished analyzing the extent of gerrymandering in the North Carolina General Assembly. Team members also worked with four local high school students to develop two new algorithms that generate representative collections of redistricting plans, and study how counties must be split to adhere to “one person, one vote” redistricting criteria.

The team saw this research travel all the way to the U.S. Supreme Court. Oral arguments for Common Cause v. Rucho occurred on March 26, 2019; the evidence for this case rested heavily on the expert testimony of Mattingly and the accompanying research, with significant contributions from undergraduates. In addition, the team helped conduct research investigating gerrymandering in the North Carolina legislature, which went into an expert report for Common Cause v. Lewis.

Luke Farrell as a student and an alumnus

NC’s Legislative Maps Are Deemed Unconstitutional. So What Does This Mean for 2020?

From a Classroom to the Courts: Team’s Research Cited in Gerrymandering Cases

As Court Battles Continue, How Does NC Move Forward With Redistricting?

Kicking Off a Summer of Research With Data+

Class of 2019: Eight Students Who Changed Duke...And Themselves

The Supreme Court Takes on Gerrymandering. A Cottage Industry Wants to Prove It's Gone Too Far

‘All That Hard Work Paid Off’: Duke Students Road-trip to DC to Hear Research They Worked on Cited by Supreme Court

Duke Mathematics Has Its Day in Court

Looking for a Way Forward on Redistricting Reform

Meet the Members of the 2018-19 Student Advisory Council

The Fight against Partisan Gerrymandering Continues

See related Data+ summer project, Gerrymandering and the Extent of Democracy in America (2018). 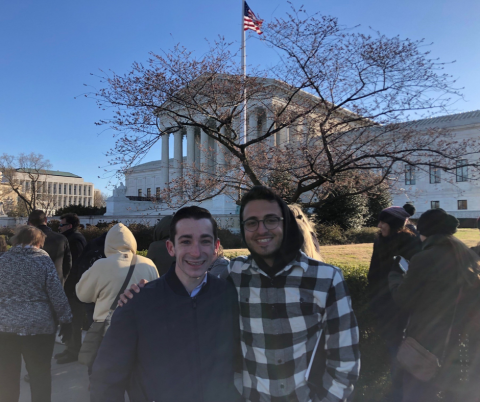