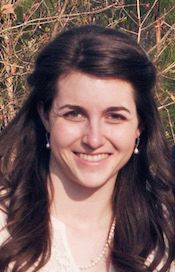 This year, I have been working with a Bass Connections in Energy team to examine the impacts of unconventional oil and gas development in rural communities, which involves the controversial practice of hydraulic fracturing. The team is composed of seven students from four programs: April Christensen, Erin Litzow, Jessica McDonald, and Alyssa Poirrier are in the Master of Environmental Management program; Can Feng is in the Master of Public Policy program; Jeff Feng is an undergraduate Environmental Science and Policy major, and myself. In addition to the three faculty advisors for the project, Drs. Erika Weinthal, Avner Vengosh, and Emily Klein, we are also assisted by the wonderful Jennie Harkness, a doctoral candidate in Earth and Ocean Sciences and a member of Dr. Vengosh’s lab. Most of the team was especially interested in the opportunity to learn more about unconventional oil and gas development in the Bakken, which is one of the largest shale plays in North America and encompasses a large portion of North Dakota and a smaller portion of Montana, along with neighboring provinces in Canada.

This fall we were lucky enough to have two compelling lectures on this very topic hosted by Duke University. Through Bass Connections, we were able to schedule additional time with the speakers in a more informal environment. These talks turned out to be critical to the development of our collaborative projects by refining our research agenda in profound and unexpected ways.

In October 2015, Lisa and Walter Deville, two community leaders and activists from Mandaree, a town in the Ft. Berthold Indian reservation, which is home to the Mandan, Hidatsa, and Arikara Nation (also known as the “Three Affiliated Tribes”), visited Duke and gave a public talk. As the Devilles explained, Ft. Berthold is located right in the middle of Bakken shale development in North Dakota. Through our preliminary research, we had read examples from the literature on risk and risk perception, as well as recent studies by scientists and geochemists that contrasted these risks with the actual chemical processes at work; coupled with a review of popular representations in newspapers and documentary films, we thought we had some idea of what was going on. We knew that the rapid uptick in development in oil and gas had an array of impacts on local communities, some positive, others negative, but we did not know the extent and the exact nature of these impacts in the Bakken region. 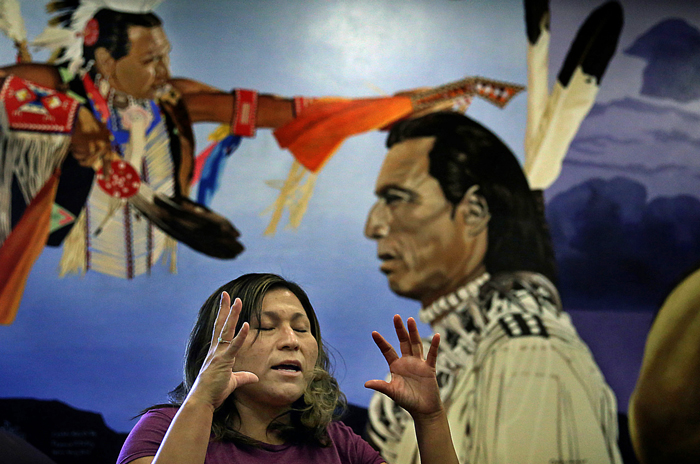 The news that Lisa and Walter had for us was sobering. Self-described local activists and environmental advocates, they have been actively working in their local community and in the regulatory process through public comments to do something about what they perceive to be extremely harmful impacts to their region. They described “a spill every day,” truck traffic alongside rural post offices, waste dumping from man camps, students who chose to drop out of high school because their family was profiting from oil and gas leases, and the sound and scent of gas flaring. Where they could, they presented video and/or photographs as evidence of these claims. Lisa and Walter also described the particular spiritual significance of water for Native American peoples, in order to explain why it was so personally troubling to them that their fellow tribal members had begun to sell water to the oil and gas industry. They also explained that they had witnessed the destruction of historical sites that had been marked for preservation to permit extraction, that they knew of drilling that was occurring on top of the Badlands, and openly discussed what they believed were long-term issues with corruption and inadequate local representation (Walter is currently running for a position on the local Tribal Council). Furthermore, they suggested that the additional level of federal oversight through the Bureau of Indian Affairs constituted the sort of regulatory burden often characterized as ‘red tape’ that prevented them from seeking timely redress against the environmental harms perpetrated by the companies. They suggested that this inability to seek redress through local government or the federal regulatory state had ultimately enabled the kind of unchecked development that they were experiencing. Finally, they showed us what felt like the longest possible video of gas flaring—an ominous plume of toxic vapors, barely visible but accompanied by a low rumble, endlessly spiraling upward, day and night. After speaking with them, the film Gasland felt like an understatement.

We were so overwhelmed after their talk, and struck by the sheer urgency of the problem, that we felt that we had to completely change our projects. Originally, one team had hoped to gain the trust of local leaders and dig into local tribal documents to “follow the money,” employing a method similar to the Shale Public Finance project by Richard Newell and Daniel Raimi as part of the Duke Energy Initiative. Prior to the Devilles’ arrival, I worked with another team member to develop a plan for a small oral history project, to document the reactions of the local community through a mixture of qualitative interviews and lengthier oral histories. After speaking with Lisa and Walter, we realized that neither of these projects adequately addressed the needs of the community—the potential of local corruption made the finance project difficult, if not outright dangerous, and Lisa and Walter said that the community had been interviewed by many other social scientists. I found myself asking, what good would one more outsider with a microphone really do for this community?

We stepped back, and considered how the Devilles’ visit had changed our understanding of the issue. We found that one of the major limitations they faced was that because the tribal government was pro-development of oil and gas, with limited regulation at the federal level, there were no checks on the power of the local governing structures. There are a variety of reasons why oil and gas development is primarily regulated at the state level, and several compelling arguments that fracking should not be regulated at the federal level. However, we recognized a common theme in major debates about fracking—that a lack of information polarizes the national debate along partisan lines in a way that seemed unlikely to generate effective regulations. We decided that, instead of trying to gather our own data, perhaps it would be best to use data that already existed to track major trends and create compelling data visualizations of local impacts including housing, population, and labor, so that more people could learn about the major risks of hydraulic fracturing in these communities.

Then, in early December 2015, John Graham, former administrator of The Office of Information and Regulatory Affairs (OIRA), came to Duke in his capacity as the 2015 Lamb Practitioner at the Rethinking Regulation Program at the Kenan Institute for Ethics to speak on the future of unconventional shale gas development in the United States. Consistent with his background and expertise, Graham’s approach to the issue of shale development was to look at the issue on a national scale. As a policymaker and an academic, Graham was most interested in not only the content of the policy questions, but who shapes those questions and where major political figures stand on a given issue. For example, he claimed that Presidential candidate Hillary Clinton may have changed her tune about hydraulic fracturing in recent months through a suggestion that hydraulic fracturing should be banned on public lands; he further implied that this move was a strategy to garner votes from environmental groups. Graham was also interested in the conflicting responses to fracking as they manifest in the push for a moratorium in many states (North Carolina included). In his lecture, he illustrated the complexity of the issue with a map of the township-by-township prohibitions on fracking in Pennsylvania at the state line with New York, in which a statewide ban is currently in place. The crux of his argument, that public opinion will determine the future of fracking, was firmly grounded in the literature of risk perception and employed key data points from public opinion polls conducted by his researchers and other scholars.[1] The point of that argument, that persons who possess expertise or additional information about hydraulic fracturing get involved at the local level, was eminently practical and actionable advice. 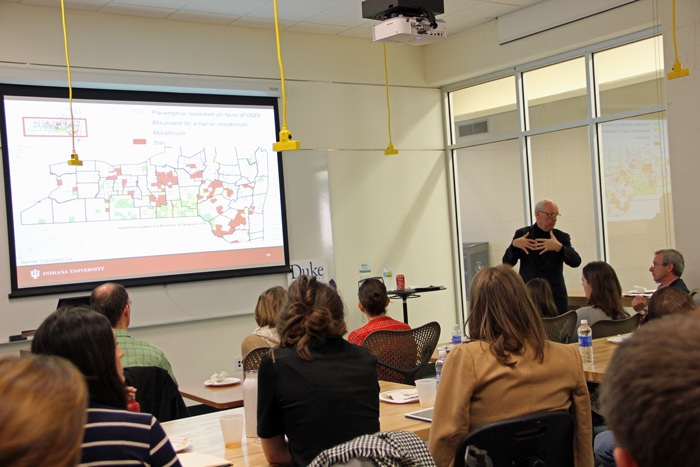 As one might imagine, the differences in the two talks could not have been more stark. It is easy to look at Graham’s talk and compare it to the Devilles’ experience to point out what Graham is missing by not including the Bakken as one of his cases for closer inspection. An examination of historical responses to new technology reminds us that public opinion has always mattered, and that risk perception does not neatly track along party lines. The distinction between what Graham conceived of as ‘community reinvestment’ and the cost-benefit calculation of WTA (willingness-to-accept) seemed fuzzier than I might have preferred. At the same time, as we discussed the issues with the Devilles, it became increasingly clear that their experience was likely to be an extreme outlier in the national realm of experience with oil and gas: the complexities of navigating the legal and regulatory structures within a Native American reservation along with the potential problems of local corruption had worked to compound the environmental harm and fragment ‘public opinion’ through unequal distribution of risks and benefits.

Ultimately, the two talks worked to validate the research agenda that we had chosen. The Devilles’ talk challenged us to be realistic about what we could achieve and to aim for a project that could offer meaningful information to a local community. Graham’s talk reminded us that this is more than just a local issue in North Dakota; the stakes—and the decision-making—are happening on a national stage. The public opinion polls cited by Graham suggest that the ‘everyday person’ is not well informed on these issues. Given that North Carolina has gone through its own debate on shale resources in the past few years, the value of providing this kind of ‘big-picture’ information on impacts seems equally important to the local discussion as well as the much broader public discourse.

Perhaps the clearest lesson to be taken from listening to these two talks is that our role as a Bass Connections team is to bridge these two kinds of knowledge. Located firmly within academia, we have the expertise and skills to engage with the growing literature on the subject. However, our time spent with the Devilles has given us the necessary perspective to look past the scholarly and political debates and consider how the data ultimately reflects someone’s lived experience.