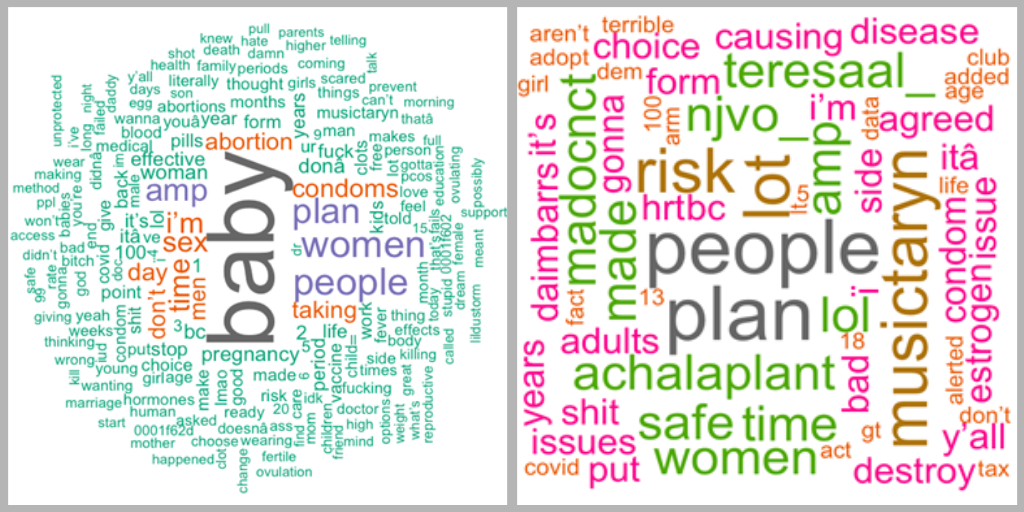 This year, Big Data for Reproductive Health (BD4RH) developed two research projects with the aim of understanding social sentiments through social media analysis with big data methods. We recognize this form of analysis is a relatively new development in research methodology posing significant implications for analyzing reproductive behavior and health trends, especially in the context of political events and contraceptive education. Our team divided into two smaller subteams to investigate more distinct questions around reproductive health with Twitter data analysis.

Reproductive rights and access to long-acting reversible contraception (LARC) have become especially contentious in light of recent significant political events. As a response to the nomination of Justice Amy Coney Barrett, this team asked: What are the effects of large-scale conservative political events in the U.S. on the discussion around long-acting reversible contraception (LARC) and LARC uptake on Twitter?

We hypothesized that most weeks we would expect the discussion on Twitter around contraceptives and LARC uptake to be “negative”. However, we hypothesized that following significant conservative political events, specifically the election of Donald Trump and the death of Justice Ruth Bader Ginsburg, this discussion would be met with a significant increase in “positive” tweets. Thus, the overwhelming sentiment around LARC immediately following the event will be positive, especially surrounding LARC uptake.

We hand coded over 10,000 tweets with mentions of two popular LARC methods (IUD or Nexplanon) with the goal of qualifying and quantifying sentiment and perceptions around LARC. Following this, we trained a model with part of our hand coded dataset that accurately classifies tweets with regards to LARC sentiment and LARC uptake sentiment. We will produce a manuscript for publication, a poster, visual aids representing our findings, and share our classifier model for tweet analysis in relation to LARC-related sentiment.

Our research has significant implications both in the realm of Twitter analysis methodology and contraceptive research. Future directions of research from this project are numerous. For example, one might ask: Does social media discussion following political events translate to “action”? If so, how, to what extent, and in what direction?

Throughout our research process, Team RBG has learned that research design is an iterative process. We have encountered, and overcome, several challenges – principally, evaluating and navigating various big data methods for social media analysis and classifying tweet sentiment accurately. We relied on clarifying our research question and hypothesis to drive and adapt our methods and research design. We thoroughly enjoyed the hands-on approach that allowed each of us with diverse skill sets to come together and produce a series of final outputs with guidance from our team mentors. 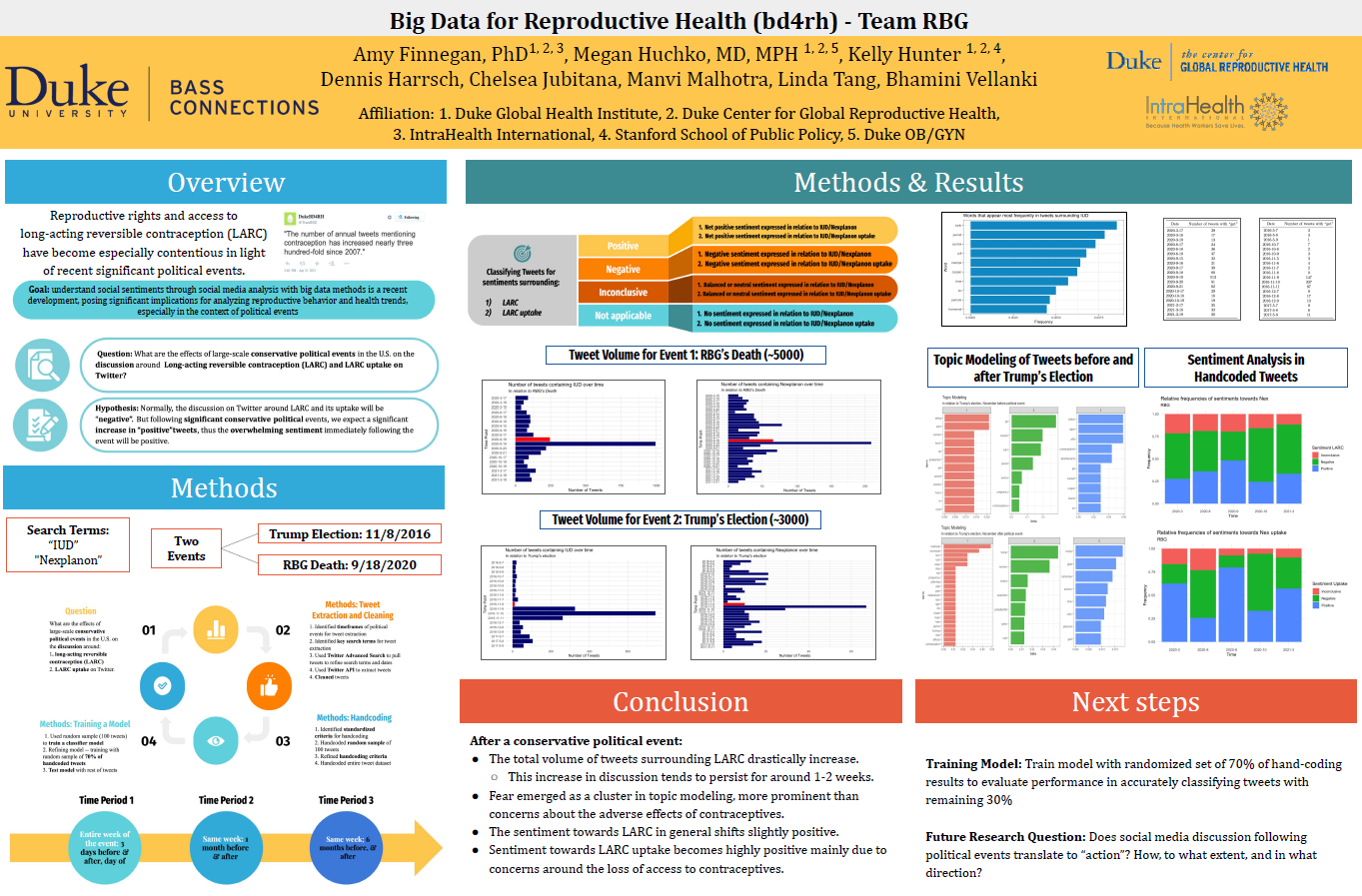 Team MythBusters sought to understand the extent, in terms of quantity, sentiment, and influence, to which Twitter users in the U.S. believe that oral contraceptives can lead to future fertility issues in women. The team pulled data every week for four weeks; each tweet was hand-coded by two people; and then the differences were reconciled in preparation for aggregate analysis.

The first three pulls yielded 5657 tweets, of which 1651 were unique. Each tweet was coded for its content (e.g., pregnancy, infertility, health safety, birth control, plan B, abortion, efficacy, men, women, COVID, correct) and for expression (e.g., personal, suggestion, complain, authority, question, humor, opinion, popular belief, fact), as well as its exhibition of belief in the myth that oral contraceptives cause infertility and its exhibition of general misinformation on a binary (0/1) scale.

From our analysis, the most common topic related to the discussion of oral contraceptives is pregnancy. There are also substantial discussions around the pill’s effect on health in general. Interestingly, discussion around men’s role in contraceptive health is among the top 10 topics.

As a senior, entering Bass Connections was a little daunting because it was my first research experience throughout my college experience. However, the BD4RH team was very supportive throughout the process, both in exposing me to Big Data concepts to guiding us in sharpening our methods for the study we wanted to conduct. Throughout the process, I realized that not only is planning ahead very important for a research study, but having a team that can divide work based on each other’s strengths is imperative. Looking back, clarifying our question and refining what inputs and outputs were hoping to produce would have made the research process smoother. However, the iterative process of reworking our questions and methods allowed us to really take ownership of our research design, which felt more involved than simply being a research assistant. Moving forward, I hope to learn to continue building my foundations in research and stepping out of my comfort zone by improving my technical skills. –Shana Abraham ’21

Even though I was only on the team for one year, I was able to learn so much and grow my research skills extensively. Not only do I now have an appreciation for the field of big data, I also understand what an iterative and fascinating process completing a research project can be. I learned so much about working with a team of diverse members that all had different skill sets, and I think that this was one of the most formative and important experiences that I will take with me long after my time at Duke. Though the research process was sometimes daunting, it was manageable given the support of my team members and mentors who were more than happy to discuss issues and give advice all along the way. I look forward to bringing all of the lessons I learned as a member of the bd4rh team into continuing to improve my research skills, even after graduation. –Meghan Peel ’21 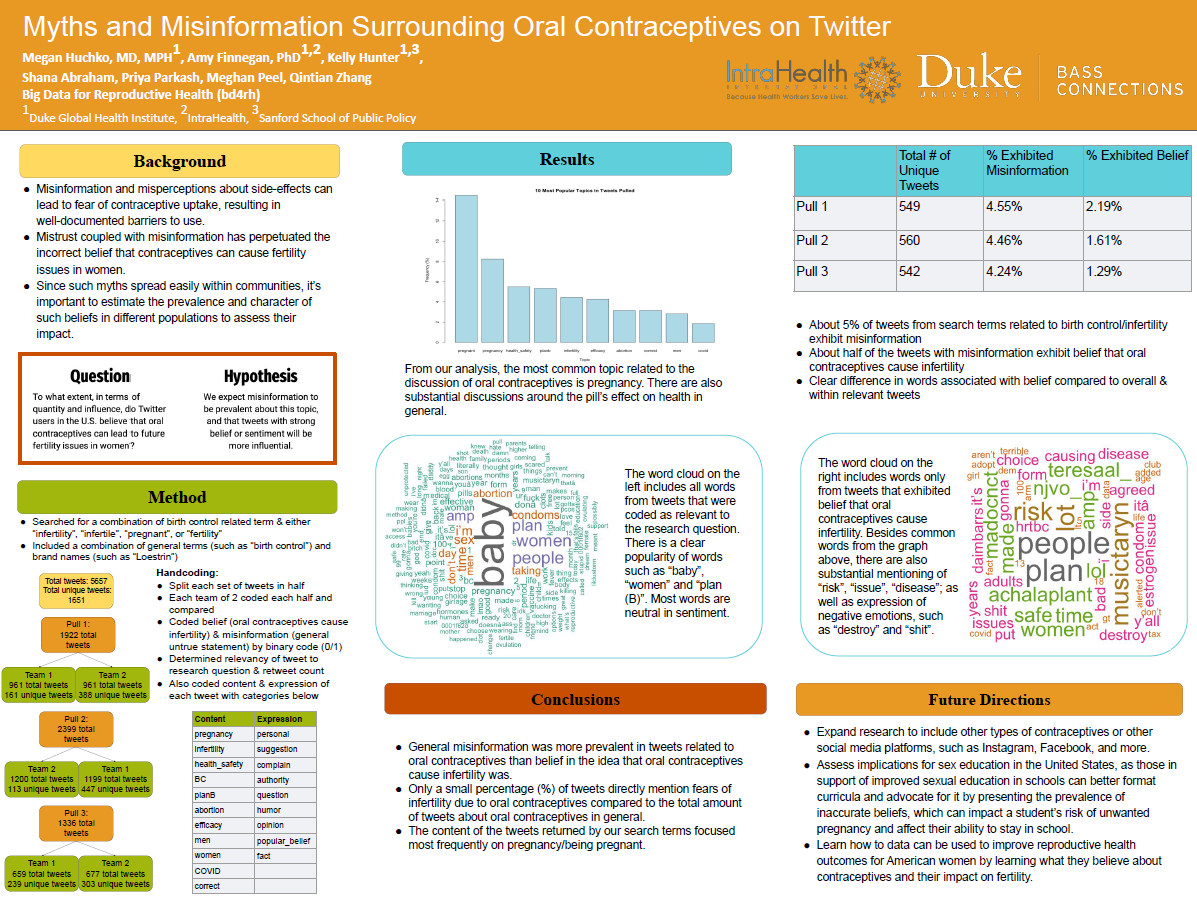