Everything should be equitable, right? I think we can all agree on that!

At least that’s how I used to think, prior to attempting to assess equity in the context of a carbon pricing program. Equity is something we have come back to time and again this year during our discussions, as it is one of the primary sticking points. We know a prerequisite to any proposal is the perception of equity. If the program isn’t fair, it is likely destined for failure.

Through our internal conversations on our Bass Connections team and our time at Yale discussing their progress on a carbon charge program, one lesson about equity has started to become evident: with every potential program design, a case can be made for and against how equitable it is.

Yale conducted a pilot program on campus to test four different design mechanisms for a carbon charge program. After the trial period concluded, stakeholders from each of the four design groups were asked to fill out a survey. Regardless of design mechanism, some groups always perceived the game to be rigged against them in some way.

Take, for example, a flat tax program, in which every department is charged the same rate for each ton of CO2 emitted. Larger departments are bound to find this setup inequitable, as they inevitably will have to pay a larger sum in taxes than smaller departments will.

Before starting this project at the beginning of the year, as I predicted challenges we would face, I vastly underestimated the challenge of equity. With any carbon charge program, some departments will be better positioned to handle the charge than others. The key is mitigating any relative disadvantage as best we can. To accomplish this, we are seeking input from as many stakeholders as possible, in the hopes that all groups can come to a mutual understanding in the context of a carbon charge program. 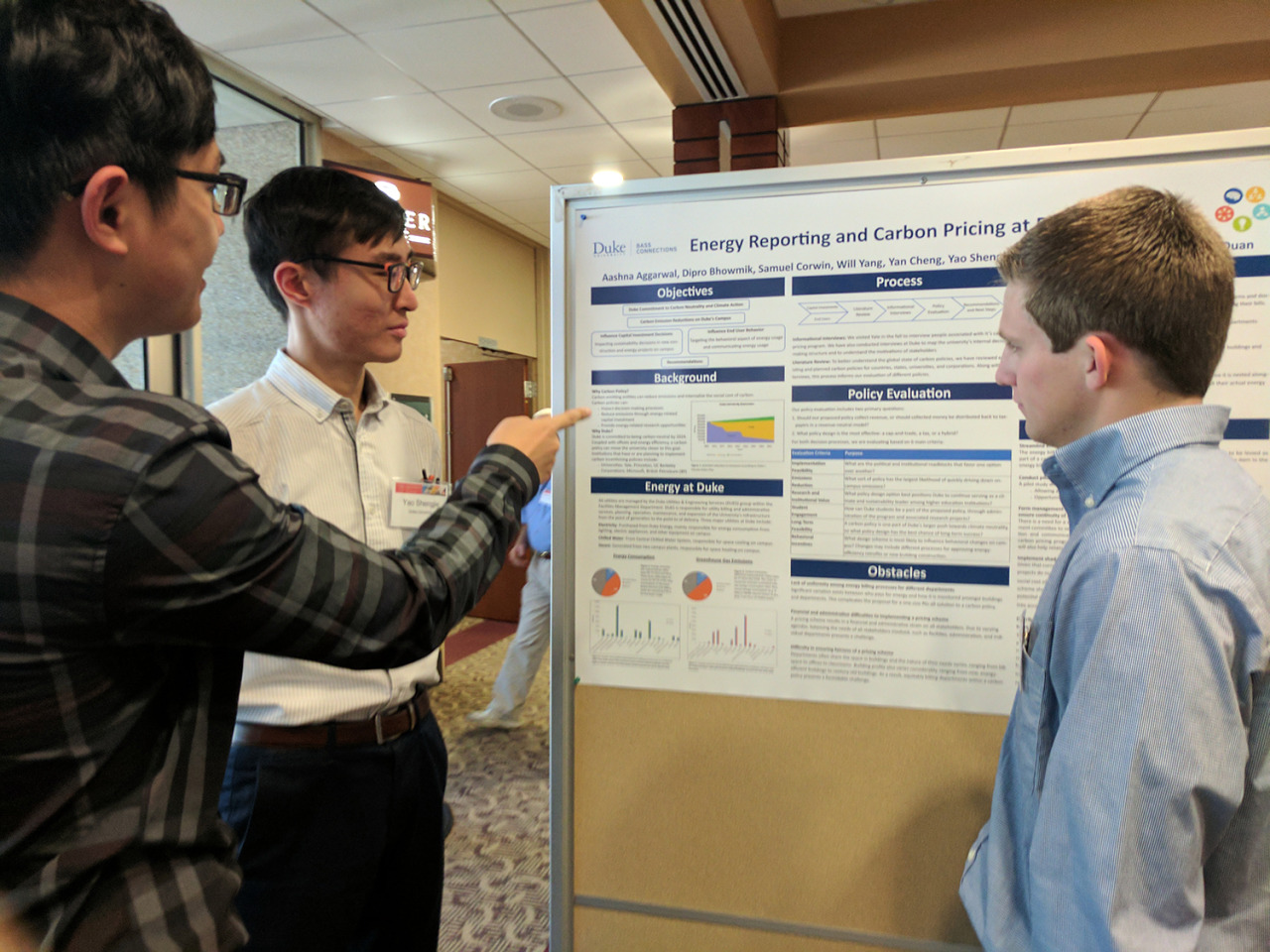 As our Bass Connections team began developing carbon pricing recommendations on campus, we saw avenues for a potential partnership with Duke’s proposed combined heat and power (CHP) plant. The thinking was: Duke will save money yearly if the CHP plant were to be built, so if we could implement a carbon pricing program around the same time, savings from the CHP plant would be negated by the carbon charge. This would be more politically feasible, as departments would not see an increase in energy costs and Duke could have a flagship environmental initiative to pair with the new plant on campus.

This potential partnership did not pan out quite as we expected, but it did provide insights into the Campus Sustainability Committee (CSC). After seeking to learn more about the CHP efforts, I became involved with the CSC’s CHP Plant subcommittee, which spent the year evaluating the merits of the proposal. Attending these meetings and being involved in the discussions provided me and the rest of our team with added insights into how Duke University makes decisions, the things we should be considering in our proposal, and how to make a strong case in support of carbon policies. Additionally, these meetings provided me with a weekly opportunity to ask representatives from Facilities and the Nicholas School about outstanding questions related to our research.

While the plan isn’t to pair carbon pricing with a CHP plant like we once hoped to do, linking up with the CSC and becoming involved in the CHP meetings allowed us to gain expertise and knowledge that helped move our project along. Now, we hope that the CSC will be the group working to implement some of our proposals.