Building Capacity for Surveillance and Diagnosis of Respiratory Viruses in Sarawak, Malaysia (2017-2018)

For the past six weeks, my Bass Connections teammate Rick (at right, above) and I have walked around open-air markets in Sibu and Kapit, Malaysia, collecting bioaerosol samples to look for virus in the air. We’ve already clocked 30 hours sampling in markets and have come to be recognized by almost every vendor.

As the summer has progressed, the number of concerned people asking about the tubes and samplers has gradually decreased. Instead, locals now flag us down to ask if we’re enjoying the food or to tell us that they saw us in the newspaper. Having spent nearly every day at one of our sampling sites, we have also found our favorite stalls to buy snacks and have made friends with many of the chicken sellers. 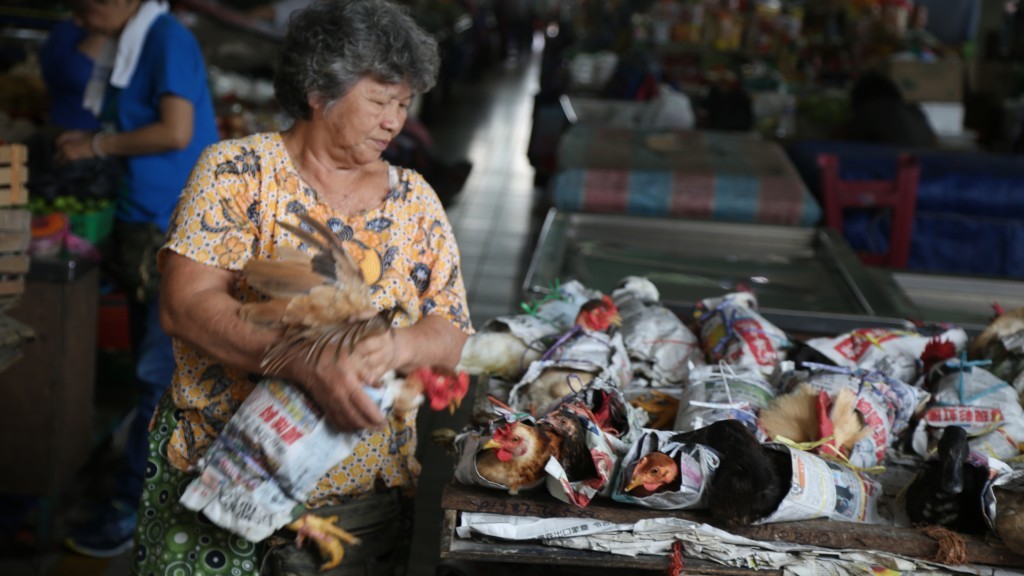 Rick and I have been using bioaerosol samplers frequently in the market because it’s an area where dense populations of humans and animals mix. Bioaerosol sampling allows us to detect different viruses in the air. The Duke One Health team has been conducting bioaerosol work for several years now and has found this innovative technology to be a non-invasive and efficient means to conduct surveillance for respiratory viruses such as influenza. 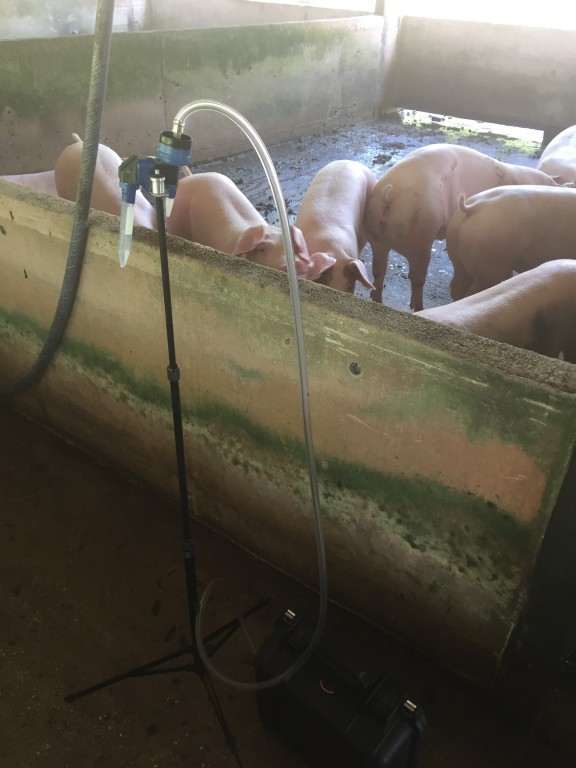 Rick and I are particularly excited to be involved in this work because bioaerosol surveillance is a cutting-edge technique that has raised questions about possible occupational exposure risk for humans working in close contact with animals.

Our team has been testing these samplers in Sarawak, Malaysia, in open-air markets, pig farms, slaughterhouses and hospitals to detect aerosolized respiratory viruses and determine if the samplers are efficient in these settings. The samplers can either be worn on a backpack for mobile sampling or set up on a tripod for stationary sampling.

The sample collection works by vacuuming air through a two-stage bioaerosol sampler that was designed by—and is on loan from—the National Institute for Occupational Safety and Health (NIOSH), an agency of the U.S. Centers for Disease Control and Prevention (CDC). Air is first sucked into the sampler through the inlet (see photo) and flows through each of the tubes and a chamber containing a filter. Air is pulled into the sampler in such a way that it swirls around the tube, similar to a cyclone. 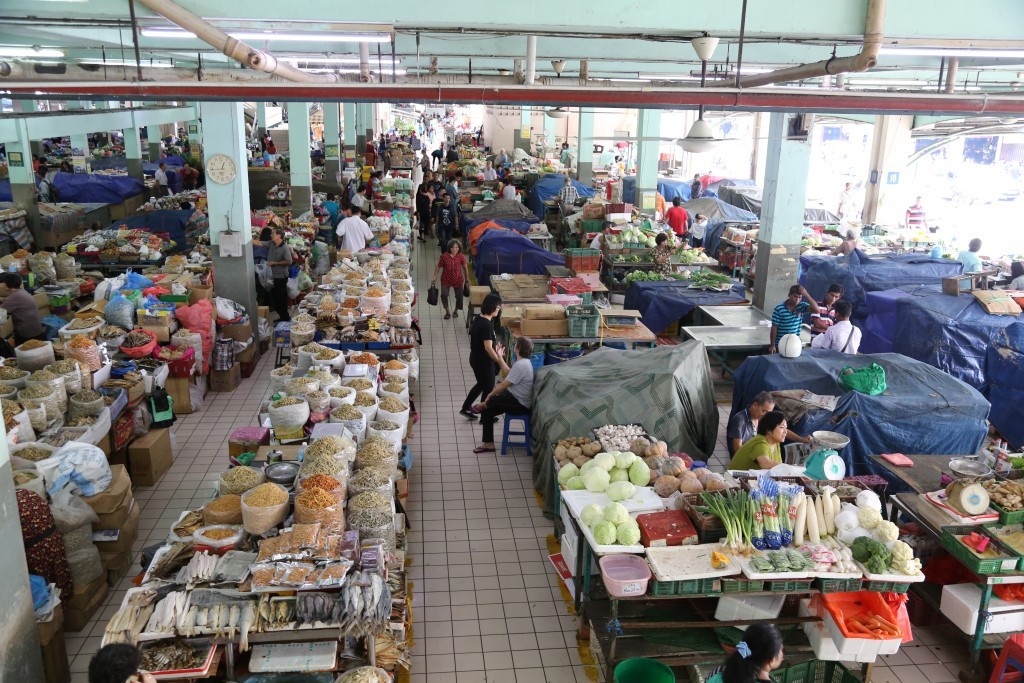 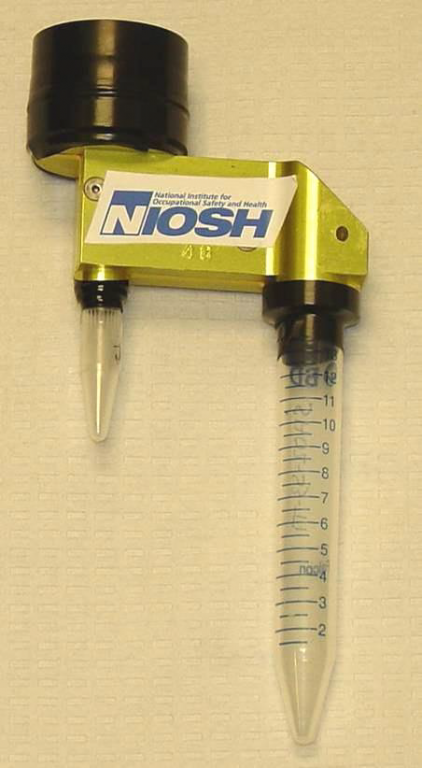 As a result of the centrifugal force, particles collect on the inside walls of the tubes. This particular sampler has three components (two tubes and a cassette with a Teflon filter) and thus collects particles of three sizes. The air and particles first pass through the largest tube, where large particles will settle on the inside wall. The air and uncollected particles then flow out and into the second tube. Because the second tube has a smaller radius and smaller inlet nozzle (resulting in faster airflow), smaller particles will collect here. The smallest particles pass through this tube and collect on the filter.

To sample at the market, we take a Grab car (the Southeast Asian equivalent of Uber) downtown and use a field calibrator to ensure that our pumps are running at the correct speed in liters per minute. Once the pump is calibrated, we walk around the market for an hour or two as the air in the market is sucked through the NIOSH samplers.

Once sampling is completed, we stop the pumps and record the length of collection and the weather and humidity in the area. We then head back to the lab, where we process the samplers and test for viral DNA or RNA.

We put a small amount of solution in each tube attached to the sampler and soak the filter in the cassette in this same solution. This solution helps maintain viral viability and allows us to collect the virus particles off of the filter and walls of the tubes. After the sampler is processed, we use real time PCR, a laboratory technique used to amplify and detect specific DNA and RNA segments, to determine which (if any) viruses were detected in the air.

Our hope is that bioaerosol samplers may serve as an early warning system for emerging respiratory threats such as SARS, MERS-CoV, Avian Influenza, Influenza A and more.

We’re really enjoying sampling so far, and we’re excited to share the results once the study is completed!

Photos by Jim Rogalski (except pigs and NIOSH sampler)