On a Saturday morning in late September, six of us piled into a minivan and headed north. We were embarking on the 2016 Carolina Farm Stewardship Association’s farm tour, where we would have the chance to explore a few local farms and see how they operate. We settled on three farms north of campus, where we would be able to see differing production styles and animals.

Our first stop was Bull City Farm. We were greeted by its owner Samantha (and a brand new piglet for whom we suggested a few names). She, with help from her husband Scott and their three kids, raises hogs, cows, chickens and sheep. As we walked around the enclosure areas of pigs, we noticed the different breeds and ages of the animals. Particularly noteworthy were the Mangalitsa hogs, a hairy Hungarian breed known for the cured pork products made from them. The hogs are raised for their entire lives outside on pasture, and are rotated among pens frequently. Taking a walk around the hogs proved a sharp contrast to the confined hog operations we have been discussing as we begin our project. It will be important to keep such a different model in mind as we look for solutions to animal waste management problems. 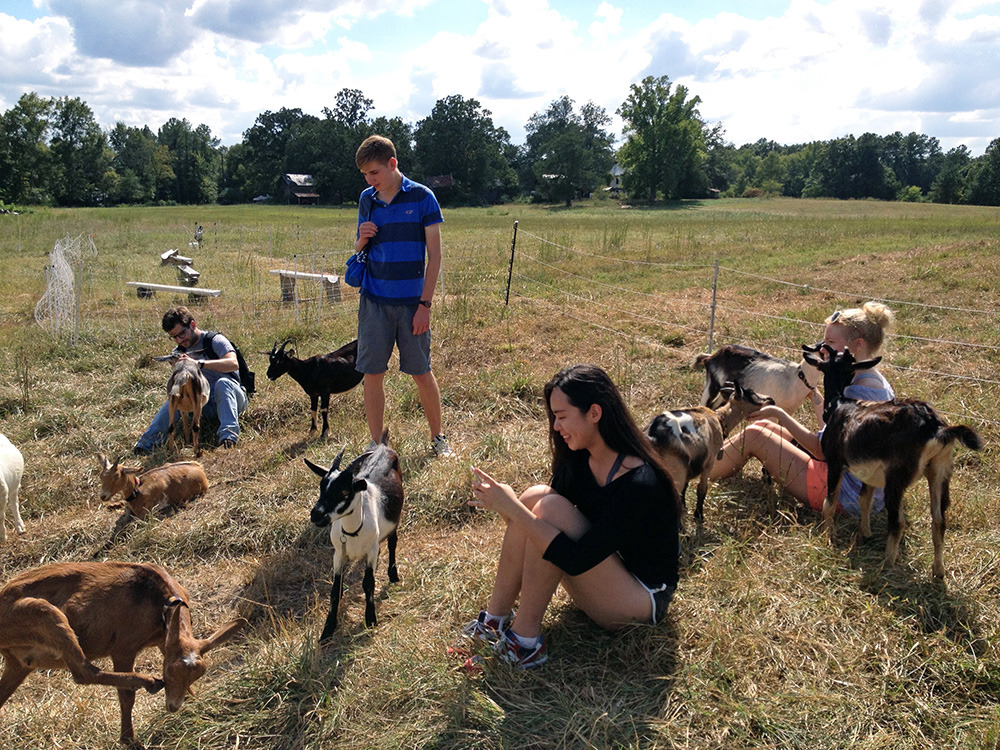 Next we drove up to Prodigal Farm, a goat farm and dairy. The owners, Dave and Kathryn, raise Animal Welfare Approved goats and produced high-end cheese from their milk. They focus on maintaining the health of both their animals and the land on which they raise them. The owners make a point of moving the goats around every few days and work to prevent disease in order to avoid having to treat it later. We had the opportunity to tour the dairy, watch a soap-making demonstration, sample products and greet the goats. After seeing the effort and passion that goes into the process at Prodigal, it was no surprise that the end products were top-quality. That kind of effort and passion, however, is not possible for all producers within the structure of our current food system. We will have to keep in mind throughout our work that labor is a key factor in the sustainability of production.

Finally, we stopped in at Blue Whistler Farm. Run by Amy Sliffe with help from her husband, the five-acre homestead is home to a variety of animals, from turkeys to rabbits. Blue Whistler is especially engaged in the local community: by hosting open farm days once a month, the owners encourage their customers to see exactly from where their food comes. As we wandered around the premises, we also had the chance to sample other products made my local businesses. The diversity of animals on one property allowed for effective and responsible use of a small amount of land. There may be a role for incorporating the production of many animals in one area in our solutions for sustainable waste management.

Spending the day touring these three farms gave us a glimpse into what our food system would be like if we focused our resources on small, established producers rather than the larger, more concentrated producers that have become such a large portion of the market for fresh food. We likely would not be pursuing research on animal waste management if this were the model for all of our food. In order to gain the efficiency and subsequent low prices from concentrated animal operations, however, we must also find a way to address the complications that result. Dealing with these complications is central to our work this year. The farm tour experience allowed us all to think critically about what the benefits and drawbacks are of our current systems and their alternatives.