It's five in the morning on December 20 at ‘Los Amigos’ Biological Station, where different international and national teams of scientists get ready to collect water and sediments samples from the Madre de Dios river. Suddenly, the boat stops after a sign of Jackie (our team leader) to our helmsman, and this is the moment in which all preparations come to fruition: everybody in the boat diligently starts handling sample materials under strict scientific protocols rehearsed before. Here every sample counts and is treated as gold itself, in the end, we have come so far, and so much preparation and planning are behind every sample, that we must aim for excellence.

The Peruvian Region of Madre de Dios covers one of the largest areas of tropical forests in the world (approx. 8 million hectares). However, the construction of the interoceanic highway transformed the landscape in a way never seen before. For about a decade Duke scientific teams have documented it: the increase in the human population, driven mainly by informal mining and facilitated by the new highway, has increased deforestation and environmental degradation at an unprecedented intensity and speed affecting one of the most biodiverse areas on the planet.

Before traveling to Peru, my team briefed me on the many environmental and human health challenges of the region with great depth and level of scientific detail. Before coming to Duke, I worked with the United Nations on political affairs and humanitarian diplomacy during crises –from natural disasters and public health emergencies to armed conflicts, and in different settings around the world. I conducted and led myriad field missions, and I know how important it is to have a keen attention to detail while being flexible enough to improvise if necessary. This was my first scientific mission, though, and I was thrilled by the professionalism and great chemistry among the members of my team.

In addition to getting more familiar with the scientific work behind mercury science, my primary objective was to get the most critical element of my research: the perspective of local communities. Duke teams have been working in the region for almost a decade, and during this time, there has been intensive community engagement that allowed us to be welcomed and reach out to different stakeholders. This is critical when working with policymakers, however, it’s an element often disregarded by scientists. It was rewarding to discover that this was not the case and Duke teams have taken communities and stakeholders very seriously. 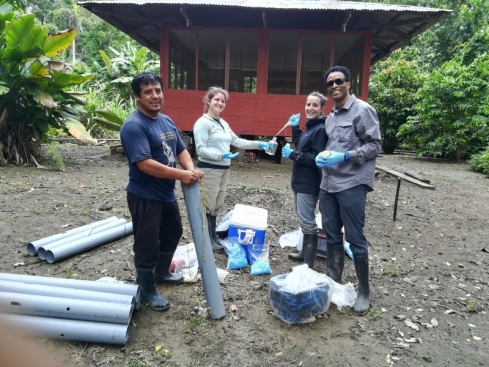 I spent a significant part of my time engaging native communities of the region. One of them, ‘Tres Islas’ indigenous community, was granted precautionary measures by the Inter-American Commission of Human Rights (IACHR), on September 8, 2017, because of the high level of contamination by mercury as a result of the presence of mining concessions in their territory, and because they experienced land grabbing and indiscriminate deforestation.

Even though my training in the MIDP degree program at the Sanford School of Public Policy has included a considerable component of policy analysis and international development, my role in this project has been quite focused on bridging the gaps among disciplines through the identification of synergies, connecting the dots, and creating collaboration opportunities. This work has been greatly facilitated by the previous extensive work of Duke teams in the region.

It is great to see how the bridges been built are serving as platforms in which halfway encounters among silos are facilitated while creating the opportunity to arrive at innovative perspectives regarding the same topics, in a more collaboratively manner.

Looking forward, I am convinced that the role of academic research institutions is critical to realize the Sustainable Development Goals, the only global framework that exists to tackle the most pressing problems faced by humanity. When I return to my assignments with the United Nations, I will continue working on strategic policy and planning tools that can help our global operations to drive responses upon challenging situations in volatile, uncertain, complex, and ambiguous conditions.

Excerpt from an article on Duke Sanford’s page.