Master of Business Administration and Master of Environmental Management '18

The simplest definition of a team is a group of people working together to achieve a common goal. Each member has different skills, backgrounds, passions, and pitfalls that they bring to the table to contribute to the purpose. A baseball team, for example, brings together people who can pitch fastballs with others who can catch, some who can hit homers all day with those who can snag a fly ball from out of the sky, all in pursuit of the World Series win. But what are the characteristics that make a team successful? After all, only one team can win the World Series. 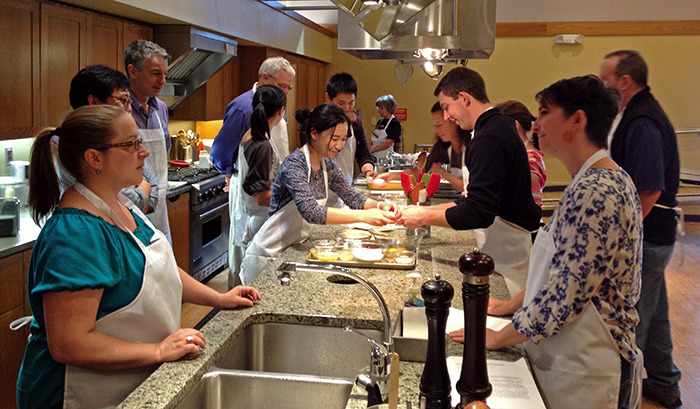 Diversity: It takes a fair amount of force to beat eggs and flour properly and achieve a lump-free mixture, but a much gentler, steady hand to transfer a full pie crust to the oven without spilling. There is an optimal balance between experimentation and rigidity in following recipes: the flour to liquid ratio of a pie crust is set, but add as much or as little nutmeg as you’d like. Effective teams have a diversity of thought processes, skill sets, and preferences that balance each other.

Collaboration: A diversity of opinion is no help without a willingness to compromise and collaborate. For one person to make a three course meal would take all day, but with fifteen people we were easily done in an hour. Working together, we accomplished more than we could on our own. And collaboration doesn’t just mean everyone contributed something; it also means that everyone let go of something. Personally, I never touched the asparagus or bruschetta. If I had, my contributions to the balsamic glaze or blackberry sauce might have gone by the wayside. In a collaborative environment, success is dependent on everyone’s ability to accept help as much as provide it.

Trust: Some of us dedicated ourselves to one task to learn the recipe in depth, while others floated from dish to dish picking up tidbits along the way. But no matter which camp you belong to, your learning strategy depends on trust. Single-taskers trust that the others devoted to other tasks will complete their dishes accurately. Floaters trust that their teammates will follow through on the remaining tasks of the dishes they left behind. We had the freedom to choose a strategy knowing those around us would pitch in where needed. Any true team depends on the trust between members, so that no individual feels overworked or overlooked.

These are the ingredients we will rely upon as we continue our Bass Connections journey. We may not be playing baseball, but I am confident that after our cooking lesson (and fabulous lunch), our team will knock this project out of the park.