Building on the work of previous teams, this project team explored spatial embodiment in virtual simulations of Etruscan and Roman cities and cemeteries as well as in real experiences during archaeological excavations. The team used portable EEG devices and eye tracking systems to acquire biometric data as well as virtual headsets, holographic screens and digital desktop simulations in the lab to engender embodied simulation.

Using various technologies and methods, team members measured perceptual judgments of scale, distance, symbols, colors, architectural features and particular objects in virtual context. Using Likert scale questionnaires, the team probed user experiences of the virtual scenarios, focusing on the visual and auditory dimensions of episodic memory and the topography of buildings, the spatial relations among architectural features, the location of key objects, the symbolic imagery embedded in the scenarios and the sounds generated to simulate performative experience of the virtual spaces.

While the pandemic limited the team’s ability to conduct in-person fieldwork, team members worked closely with partners in Italy to use digital scanners to help create 3-D digital models of artifacts. The team also built a digital repository of 3-D images that can be accessed by researchers online and we also able get much of the data about Vulci 3000’s finds online and available to fellow archeologists. Some of that data was used to create virtual versions of parts of the site and of artifacts with help from Duke’s MorphoSource repository.

Brain Activity and Eye Tracking in a Virtual Archaeological Excavation

Reimagining Global Research in a Pandemic 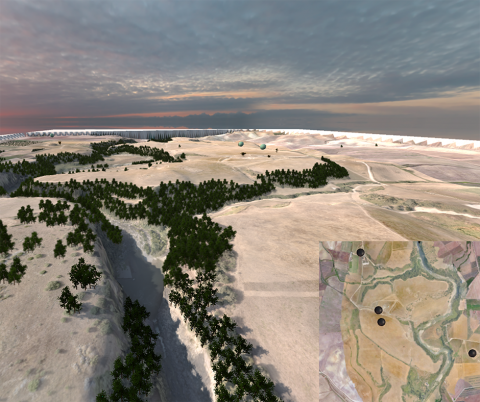