In 1949, V.O. Key argued that a desire to maintain the racial order stifled political competition and redistributive policies in the South, making the region an uncompetitive authoritarian enclave. Twenty years later, the “Old South” transformed, thanks to widespread political realignment driven by the Republican Party’s “Southern Strategy” and the social movements of the 1960s.

During this time, researchers Donald Matthews and James Prothro conducted a regionally representative survey of the South’s racial attitudes toward electoral and social movements, protest participation and residential context. Their work emphasized the changing nature of the “New South” where increased protections against discrimination showed promise toward changing the political and socioeconomic landscape of the South. Since then, many scholars have assessed the Southern political landscape, but no work has attempted to replicate and extend the work of Matthews and Prothro to assess the political landscape and racial attitudes that make up the South of today.

This project will replicate and extend Matthews and Prothro to study the “New South” and will investigate the effects of Black Lives Matter (BLM) protests today.

Matthews and Prothro used representative surveys of Blacks and whites across counties in the South, conducted in 1961, to estimate voter turnout, campaign participation, protest participation, social networks and racial and political attitudes. This team will collect and analyze data to determine how these variables have changed. Building on a representative survey of 3,000 residents conducted in July 2020, team members will acquire additional data such as validated vote files to see if respondents voted in the 2020 presidential election.

Next, the team will build a dataset with two components. One will measure protest activity, both during the summer of 2020 as part of the Black Lives Matter movement (and counter-protests) and during the civil rights movement in the 1960s. The other will extend the Matthews and Prothro census dataset through the latest available data. The team will link both protest activities and the census datasets to the 2020 survey data via county-level matching.

Finally, the team will conduct two analyses that will be written up for submission to two journals. First, team members will analyze changes from 1961 to 2021 in southern public opinion regarding racial attitudes, public policies and political preferences. Next, they will analyze the effects of Black Lives Matter on confederate statue removal, political participation, trust in the police and belief in racism as a problem and compare those effects to civil rights activities in 1961.

Learn more about this project team by viewing the team's video.

Ideally, this project team will be comprised of 6 graduate students and 6 undergraduate students. Interested students will likely be from sociology, psychology, African-American studies, political science, computer science, data science and statistic majors and have interest in race and ethnicity. Students with historical perspectives and interest in the study of historical southern politics and the study of race in a historical perspective are also a great addition. Given that part of this project involves data collection, manipulation and organization, students with experience working with quantitative datasets and conducting web scraping and data manipulation are welcome.

Graduate students will get an opportunity to lead a research team of undergraduates and receive multiple publication opportunities. In addition, they can gain access to a valuable dataset with the opportunity to pursue their own research projects using this data.

Alexandra Cooper and Arvind Krishnamurthy will serve as project managers.

Image: The vote is the most powerful nonviolent tool we have, by Thomas Cizauskas, licensed under CC BY-NC-ND 2.0 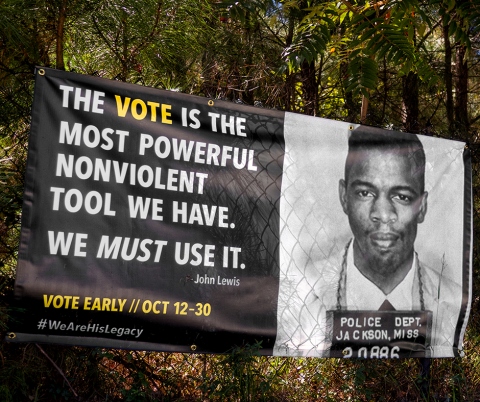