Poaching is rapidly wiping out African forest elephants (Loxodonta cyclotis) from most of their historical range, leaving vast areas of elephant-free tropical forest. Elephants are ecological engineers that create and maintain forest habitat; the reduction of elephant populations will result in dramatic ecological changes in central African forests, including altered species composition, increased stem densities of small trees and lower abundance of large trees. This unintended experiment may help resolve whether differences between central African and neotropical forests are due to the destruction of megafauna in the neotropics thousands of years ago.

Despite the threat of extinction, African forest elephants remain understudied. We have limited knowledge of their ecological impacts on tropical forests, and most studies of forest elephants have been concentrated in a few protected areas. Forest elephants primarily influence plant populations through seed dispersal and browsing of saplings and young trees, although they also incidentally prey on seeds and trample seedlings. This Bass Connections project focused on one of the key uncertainties about how forest elephants affect forests, using a combination of new technologies to measure seed dispersal in the field and model how elephants influence forest composition, diversity and structure through this plant-animal interaction.

Patterns of seed dispersal by elephants depend on two key variables: how elephants move; and the average amount of time a seed spends in an elephant gut (gut passage time). Through collaboration with the Gabon Parks Agency, Duke researchers have nearly two years of data on hourly movements of 56 forest elephants. However, there were no data on the time it takes a seed to pass through a forest elephant’s gut. To overcome this data gap, the project team conducted experiments in Gabon to estimate gut passage time in wild forest elephants for several plant species that vary in seed size. With the gut passage time and seed displacement data, the team was able to model forest elephant seed dispersal and evaluate the consequences of differences in dispersal patterns with sex, site and environmental variables for forest plant populations. 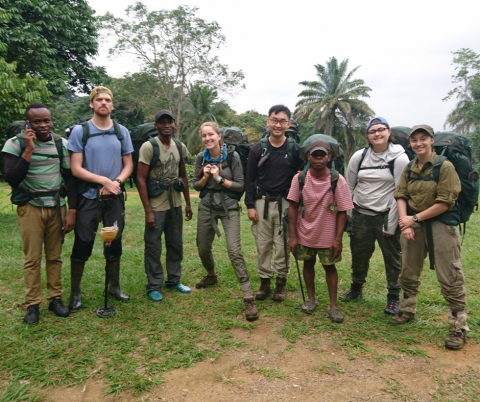