The U.S. general election in 2020 was like no other, including unprecedented levels of organization and interest across the political spectrum turnout higher than had been seen in a century. This project team analyzed election data to explore the state of youth voting rights and engagement and to identify possible interventions to improve the representation of all Americans in the political system.

Working in sub-teams, the team focused on geographic, information and legal barriers to youth voting. Looking at data on voter turnout near college campuses, the geographic barriers team found that college-age students are less likely to vote if they live on campus, particularly if they are black voters. They also found that the constant mobility of college-age students makes it more difficult for them to vote and that a lack of clear mailing addresses for students living on college campuses can increase the likelihood that a college student’s vote will not be counted. Youth voters also reported being deterred by long lines.

Team members explored drive thru voting as a means to improve the ease and safety of voting. Currently, drive thru voting in North Carolina is limited only to individuals with specific disabilities. Through voter surveys, the team found that many voters would prefer a drive thru voting option as they would find it easier, safer and would be more willing to wait for longer periods in their car. The team identified several states where it has been used successfully and developed suggested implementation plans for the N.C. State Board of Elections.

The information barriers team collected data on how misinformation is spread through social media. In one study they found that while most youth voters feel confident that they can identify dis-information, when shown several TikTok videos the vast majority of respondents failed to identify the false video. In response, the team developed a training module to help youth identify dis-information on their own. The team also tested the use of SMS Chatbots to increase voter participation, finding that while the method is likely to increase participation, barriers exist to getting legal access to cell phone numbers for youth voters.

Based on these findings, the team developed a set of policy recommendations for the N.C. State Board of Elections and partner organizations such as N.C. Voters for Clean Elections and the Andrew Goodman Foundation.

Image: Alicia Medina becomes the 22nd person to register to vote on September 22nd, 2020 at the voter registration tent at the West Campus Bust stop, by Bill Snead/Duke University 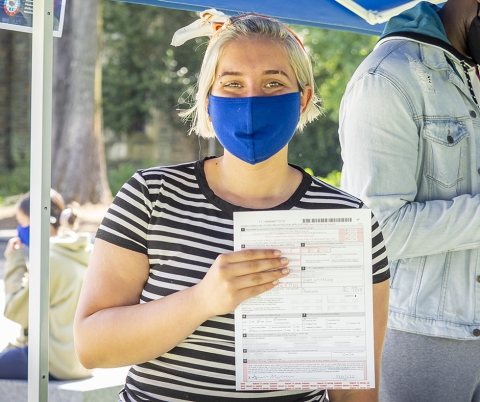