Political Gerrymandering and the Extent of Democracy in America

Please note: This is an example of a team profile. This and other virtual showcase team profile examples were drawn from information in our annual report and other communications. They have been modified and were not actually authored by these teams.

Gerrymandering – the manipulation of electoral boundaries to favor one party over another – has been present in our democracy since the early 19th century. Courts have struck down district maps that clearly disadvantage racial minorities, but they have often declined to intervene in cases where maps intentionally favor a political party, in part because they lack a credible way of assessing such claims.

In 2012, Math professor Jonathan Mattingly watched this dynamic play out in North Carolina, where Republicans won nine of the 13 seats for the U.S. House of Representatives, even though Democrats received 51% of the votes. Intrigued, Mattingly partnered with an undergraduate on a summer research project to develop an algorithm that allowed them to generate more than 24,000 alternative maps for North Carolina. By varying the ways the districts were drawn and without changing a single vote, their simulations showed that it is possible to influence the outcome of a congressional election in North Carolina by as many as five seats. A set of Data+ summer research teams in 2015 and 2018 extended the analysis to other states, and several external partners joined the effort.

This year, our Bass Connections team extended this analysis, comparing districting plans across states, analyzing the effectiveness of statistical tests currently used to detect gerrymandering and completing an ongoing study of the extent of gerrymandering in the North Carolina General Assembly. Working with with four local high school students, we developed two new algorithms that generate representative collections of redistricting plans and study how counties must be split to adhere to “one person, one vote” redistricting criteria. We presented our research at Duke’s Center for Political Leadership Innovation and Service (POLIS) Reform, & Redistricting Conference and have been featured on several local and national news channels, most notably during coverage of recent court cases. We also created a team website and research poster and presented our research through a lightning talk, featuring undergraduates Sam Eure ’19 and Nima Mohammadi ’20.

Undergraduate team members Luke Farrell ’19 and Jake Shulman ’19 traveled to Washington D.C. to attend the oral arguments for Common Cause v. Rucho, a case related to charges that the 2016 North Carolina Congressional map violates the First Amendment by reducing the influence of voters based on their party affiliation. Our team’s research on the mathematics behind drawing districts was cited in oral arguments and documents throughout the case.

Farrell reflected on his experience:

The opportunity to work on a project that is both deeply technical and politically relevant at the highest level has been a once in a lifetime experience. To learn about the abstract mathematics from experts like Professor Jonathan Mattingly and then go to the Supreme Court and see the Justices appreciate and cite research our team has dealt with was amazing. That moment made it clear to me that data and democracy are inextricably tied in our collective future, and that I want to work at their intersection in my own future. –Luke Farrell

On June 27, 2019, the U.S. Supreme Court ruled 5-4 in favor of Rucho, declaring that while partisan gerrymandering may be “incompatible with democratic principles,” such decisions were outside of the purview of federal courts. This decision effectively leaves it to states and Congress to pass laws to manage gerrymandering.

On September 3, 2019, in a separate case, Common Cause v. Lewis, the Wake County Superior Court struck down North Carolina’s legislative maps, ruling that they violated the state constitution's guarantee that “all elections shall be free,” and the constitutional guarantee to equal protection, freedom of speech and freedom of assembly.

Our team hopes to publicly release its tools through an interactive website that will facilitate the free exploration of redistricting plans by political parties, the public and the press, and contribute to the public’s understanding of the extent and impact of gerrymandering. 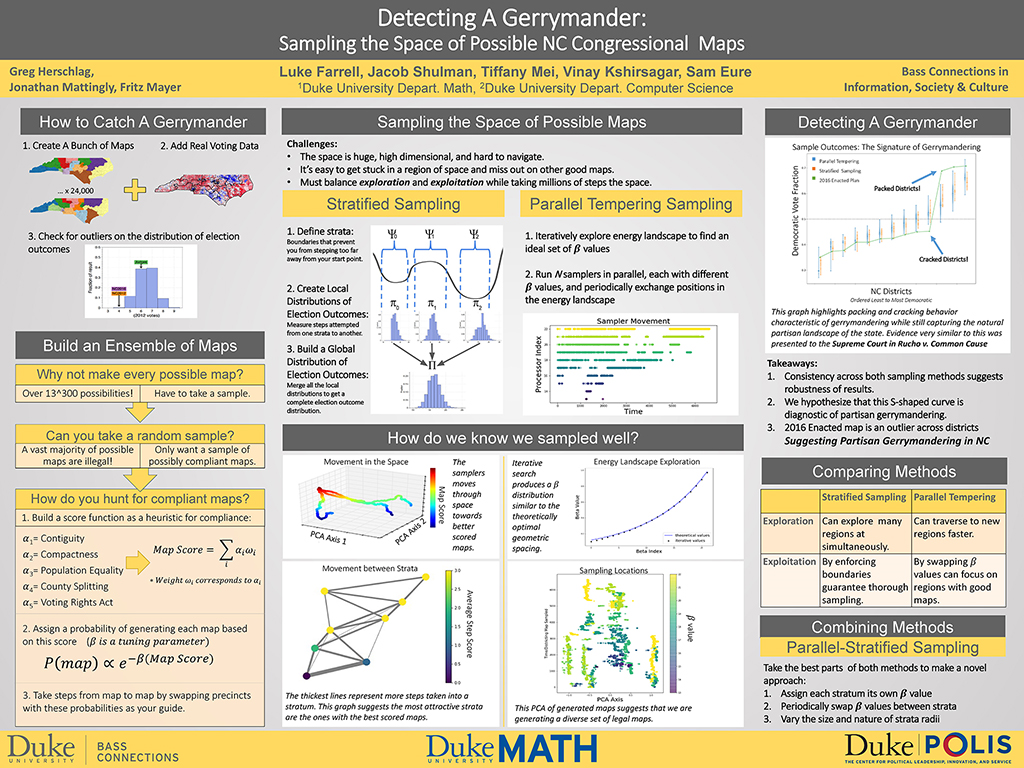