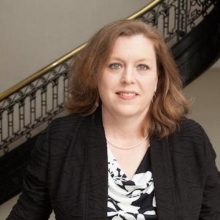 Professor Goss focuses on why people do (or don't) participate in political life and how their engagement affects public policymaking. Her current research projects focus on the role of philanthropic billionaires in policy debates and on the evolution of gun-related advocacy over the past decade. See more about Professor Goss at kristingoss.com.

Professor Goss directs the "Duke in DC" program, which provides select undergraduates with an immersive experience combining work experience and policy-oriented seminars. In 2017, she was inducted into the Bass Society of Fellows.

Professor Goss has written or co-produced three books on gun politics and policy: The Gun Debate: What Everyone Needs to Know, with Philip J. Cook (Oxford University Press, 2014; 2nd ed. forthcoming in 2020); Gun Studies: Interdisciplinary Approaches to Politics, Policy, and Practice, co-edited with Jennifer Carlson and Harel Shapira (Routledge, 2018); and Disarmed: The Missing Movement for Gun Control in America (Princeton University Press, 2006, 2009). The latter book is based on her doctoral study, which won the American Political Science Association’s 2003 Harold D. Lasswell Award for the nation’s best dissertation in policy studies.

Professor Goss has also written widely on gender and politics. She is the author of The Paradox of Gender Equality: How American Women's Groups Gained and Lost Their Public Voice (University of Michigan Press, 2013). The book documents and explains the surprising rise -- and even more surprising fall -- of American women's groups on the national stage. Systematically examining these groups' issue agendas over the last century, the book argues that public policy has profoundly shaped the nature and magnitude of women's collective voice in important national debates.

Professor Goss also is active in the Triangle Area chapter of the Scholars Strategy Network, which amplifies the voice of university-based academics in public policy debates.

Before her appointment at Duke, Professor Goss taught American politics courses at Georgetown University and served as a consultant for the Corporation for National and Community Service. Her Duke master’s thesis explored the challenges facing voluntary associations seeking to stop the epidemic of gun violence in Washington, D.C., in the 1990s.

Professor Goss grew up near Denver, where she developed a passion for figure skating and animal welfare. Before entering academe, she was a Washington-based journalist for six years covering non-profit organizations and foundations for The Chronicle of Philanthropy.