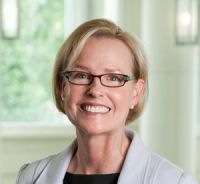 A noted expert on autism and the director of the Duke Center for Autism and Brain Development, Geri Dawson has led Bass Connections project teams dedicated to unique aspects of autism research.

One project team partnered with Voices Together, a Durham-based nonprofit, to collect and analyze data measuring the effectiveness of music therapy interventions for students with autism. Another team took part in an important collaboration among researchers at Duke University and Duke Medical Center that led to a mobile autism screening app. In 2017, Duke received a $12.5 million grant from the National Institutes of Health to study connections between autism and attention deficit and hyperactivity disorder (ADHD). A new version of the app created in Bass Connections will be validated in this project.

Below are excerpts from Dawson’s remarks at a Bass Connections information session for faculty.

When I arrived at Duke, I wanted to develop relationships with people across campus, not just in the School of Medicine.

The first Bass Connections project I was involved with has to do with music therapy as a way of promoting communication with children with autism. A program here in Durham, Voices Together, had never been tested for efficacy. Public schools were asking, “How do we know this is working?” We brought together Jan Riggsbee (Education), Lorrie Schmid (Social Science Research Institute), Yasmine White of Voices Together and an undergraduate team.

We started studying Voices Together programs in Durham Public Schools in2014. We discovered that there were no existing tools, so one of our primary questions was “How do we measure change?” Students worked hard on developing some methodology designed to help us answer this question. The next year, we focused on Alamance-Burlington Public Schools and developed our own set of methods to measure change. This led to a publication.

Next, we worked on evaluating the effectiveness of Voices Together’s Teacher Toolbox training. Our team had students from Anthropology, Public Policy and Music, and they all learned to work in a public school environment. We also began focusing on a policy statement for the state of North Carolina.

My second project was equally interesting and helped me make a lot of connections. We partnered with folks from engineering and Duke Primary Care to develop an iPad app that could facilitate screening for autism. The team included a medical student, and undergrads and grad students from Computer Science and Engineering as well as Psychology and Neuroscience, and we implemented the app in a primary care setting.

Then Ricky Bloomfield [a former Duke physician who now works at Apple] approached us about developing an Apple ResearchKit for the iPhone. Two thousand families downloaded this app and completed a questionnaire. It was phenomenally successful. We analyzed the videos [that parents were recording through the app to screen their children].

This led to several published papers and a successful competition for an NIH grant. We’ve developed a new screening app, and we’ll be validating this with an NIH grant with children coming through Duke Primary Care. It was a very fun and successful project.

We have had incredibly bright, motivated students working on the project, and I’ve learned that if you can use your leadership and expertise to leverage student engagement, these teams act as great idea incubators and a nice way to stay connected to the Duke undergraduate community. You can set up your expectations and choose students that will help you achieve a larger goal. The students presented at academic conferences and contributed to publications, and overall I think it was a phenomenal experience.

See other faculty perspectives and learn how you can get involved in Bass Connections.