Who Has Access and Who Is Left Out? Exploring Social Justice on the Outskirts of Rio

Mitchell Ryan is a sophomore at UNC Chapel Hill majoring in Economics and Interdisciplinary Studies. He took part in a Bass Connections project team to explore higher education and social mobility in Brazil. This year he is pursuing an emerging interest in water access in urban spaces. 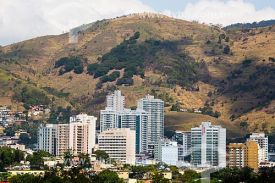 These three weeks in the Baixada served as an intensive introduction to the region. Each morning we commuted by van from our accommodation, a local church, to the Multidisciplinary Institute, a satellite campus of the Federal Rural University of Rio de Janeiro.

We attended lectures by professors, students and community members on various aspects of the Baixada, ranging from the shifting historical and geographic boundaries to environmental air quality and lack of basic sanitation.

We were deeply entrenched in inquiries into political ecology, sustainable economic growth, equitable access to public resources as well as urban transportation systems. We were forced to ask ourselves complicated questions such as:

One speaker was a professor from the Rio de Janeiro State University, Cleonice Puggian. Packed into a tiny classroom in a local private university with other students and professors, I listened to her describe the region’s environmental plight. She spoke of the sewage, lack of basic public services, racial stigma and absence of relevant policy. She highlighted injustice, pointing out colorful lines on a graph, lines telling us that the people surrounding us faced some of the worst environmental quality in all of Latin America.

Our team was in Rio to study the question of social mobility within an expanding federal higher education system, and yet for the next two weeks I could not shake the gravity of her words. How did this region become so harmful for people to live in? What was being done about it? Her presence and commitment to these issues was captivating. I knew I needed to return in order to learn about these issues from the people that faced them. 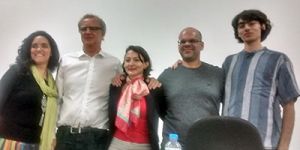 With her and Dr. French’s help, along with the support of the entire Bass Connections team, I was able to do just that. I worked to develop a collaborative research project, securing funding to return to the Baixada in the summer of 2017. My project sought to develop an understanding of flood management practices in one of the Baixada’s municipalities, with a heightened emphasis on resident voices.

“The Cost of Opportunity? Higher Education in the Baixada Fluminense” has extended far beyond what I ever could have imagined and has played an incredibly influential role on my experience as an undergraduate student. It has exposed me to various facets of research, allowed me to maintain a meaningful connection to a country near and dear to my heart, forced me to critically question our system of global higher education and most importantly, supported me in fully exploring my personal and academic curiosities.

By Mitchell Ryan; excerpted from the project team’s website