Have you ever thought about what goes on in the brain after experiencing a football-related concussion? Unfortunately, clinicians struggle to quantify the physiological implications of concussions and thus to create objective diagnoses of the injury.

To address this challenge, the Bass Connections team Oculomotor Response as an Objective Assessment for Mild TBI in the Pediatric Population assesses young athletes (5-18 years) with an eye-tracking protocol and compares that data to in-season documentation of concussions. Since 2015, the team has created instructional videos for youth participants, built a head-mounted portable tool for measuring concussions and begun to develop guidelines to help clinicians evaluate interventions. 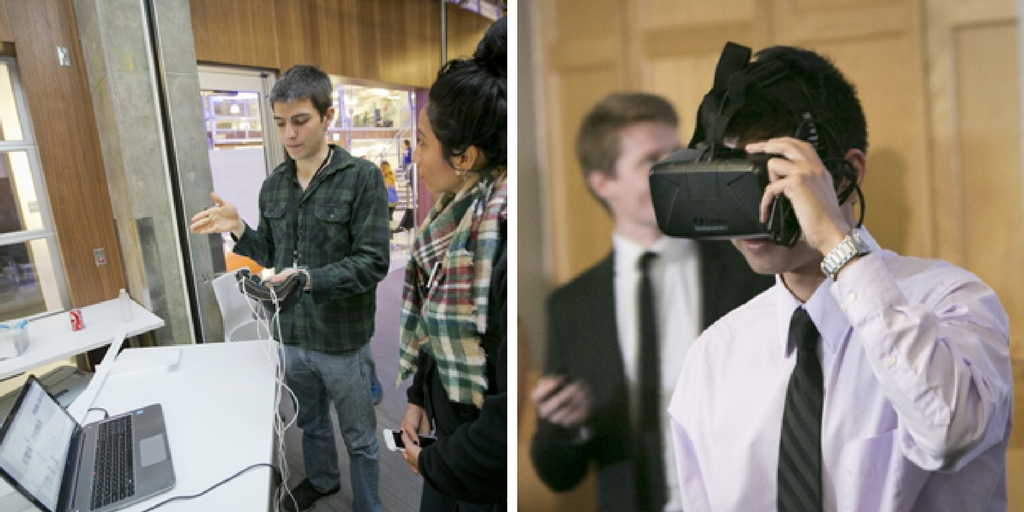 I sat down with two of my neuroscience classmates, seniors Connor Hile and Daniel O’Connell, to talk about their experiences on the team. Daniel has been part of the team for three years and Connor for one year.

Daniel and Connor were both drawn to this project due to their interest in football and sports. “As a neuroscience major, I thought it would be cool to see how the brain responds to injury,” Daniel explained. Connor agreed, adding that he was interested in the project due to his personal experiences with concussions in high school. “I suffered two within nine months of each other, which affected me both physically and psychologically. After I came to Duke, I became interested in studying them. I also liked the project’s emphasis on pediatrics because it’s a population that doesn’t get as much attention [when it comes to studying concussions].”

I suffered two concussions within nine months, which affected me both physically and psychologically. After I came to Duke, I became interested in studying them.

Certainly, a longitudinal study spanning three years such as this one does not come without its challenges. One of the biggest challenges was working in an engineer-driven lab when neither had strong coding experience. “There are a lot of simple problems that are very hard for us to fix because we simply do not have the background,” Daniel said. “Rather than engineering, I prefer looking at the data and seeing how I can apply the neuroscience principles I learn in class to what I see in the data I gather.”

I feel like the engineering mindset is very different from the neuroscience mindset.

Connor agreed, “I feel like the engineering mindset is very different from the neuroscience mindset. I wish I had known that coding and statistics would be such a big part of the project earlier on.” Another challenge Connor mentioned was the fact his subgroup within the bigger team consisted mostly of undergraduate students. Because of this, he felt that they lacked a certain level of graduate student expertise to guide them. “It became kind of frustrating at times because most of us are pretty busy and not entirely strong with the things you need to be good at. So, we often had to rely heavily on each other.”

Despite the challenges, these two also experienced many rewards, such as teamwork and the satisfaction of gathering valuable data to help a population in need. “You learn how to work in a team with people with expertise different from you,” said Daniel. “The biggest reward for me is actually having data you can analyze, from step one of the data gathering process to finally having interpretable data that makes sense from a neurology perspective.”

The biggest reward for me is actually having data you can analyze, from step one of the data gathering process to finally having interpretable data that makes sense from a neurology perspective.

Connor enjoyed working with many different pediatric populations. “I think the biggest reward for me was testing with the elementary school kids. The kids seem very interested and the parents seem concerned about their children’s health. So, it was interesting seeing how the data we are collecting may impact the new generation.” Though the team collaborates with both adolescent levels, they mainly work with high schoolers. The trend of high schoolers playing football for a longer period of time compared to the elementary school kids-—for example, four years compared to one year—helps with the retention rate for the longitudinal study. 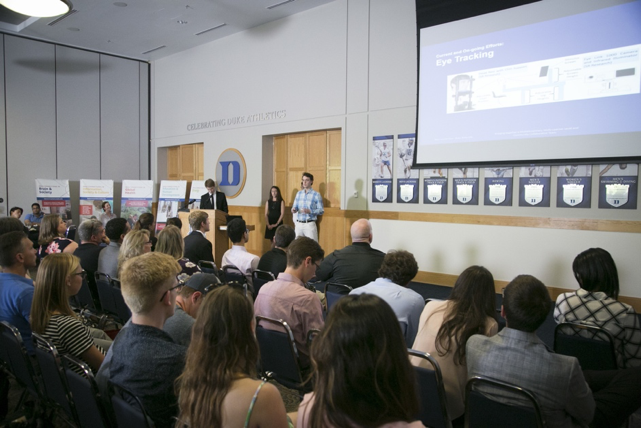 Both Daniel and Connor are currently working on senior theses related to their Bass Connections project. Daniel’s project examines an oculomotor function called smooth pursuit. Smooth pursuit refers to eye movements that allow the eyes to closely follow a moving object rather than shifting gaze more abruptly, which is referred to as a saccade. Daniel aims to investigate how the metric of smooth pursuit changes in people who have been concussed.

The kids seem very interested and the parents seem concerned about their children’s health. So, it was interesting seeing how the data we are collecting may impact the new generation.

Connor hopes to tie together several research projects he’s done throughout his time at Duke. During his sophomore year, Connor worked at UNC with MRI scans that examined the loss of cognitive function over the course of a season. In another lab at Duke, he looked at changes in the neuroanatomy of NFL players. He hopes to tie these two projects together with the saccades research he helped gather through Bass Connections. Connor also plans to pursue an MD/PhD to continue working on concussions research in the future.

If you’re interested in learning more about Connor and Daniel’s project, check out the Bass Connections Showcase on April 18. The team will also be presenting their findings at the UNC Human Movement Science & Biomechanics Research Symposium on March 9.

Hitomi Tanaka is a senior majoring in Neuroscience and minoring in Biology and Japanese. She is a student assistant in the Bass Connections office this spring semester.

Photos by Duke Photography: (Top left) John D’Angelo shows the team’s eye-tracking tool at DIBS Discovery Day in April 2016; (top right, and bottom) The team demonstrates their equipment and presents their findings at the Bass Connections Showcase in April 2017