An Overview of the Loyd Ray Farms Project

Our Bass Connections team recently went to visit Loyd Ray Farms to further understand the swine waste-to-energy system on the farm. Charles Adair and Michelle Nowlin led the trip, with Charles explaining each piece of the project. The most striking part of the field trip was the smell when we first arrived. As soon as the fans went on, we began pulling our jackets over our noses. To our surprise, Charles explained that this was a “good” day for smells on the farm, and that since the system was implemented the smells have decreased significantly, especially for the neighbors and the community surrounding the farm. 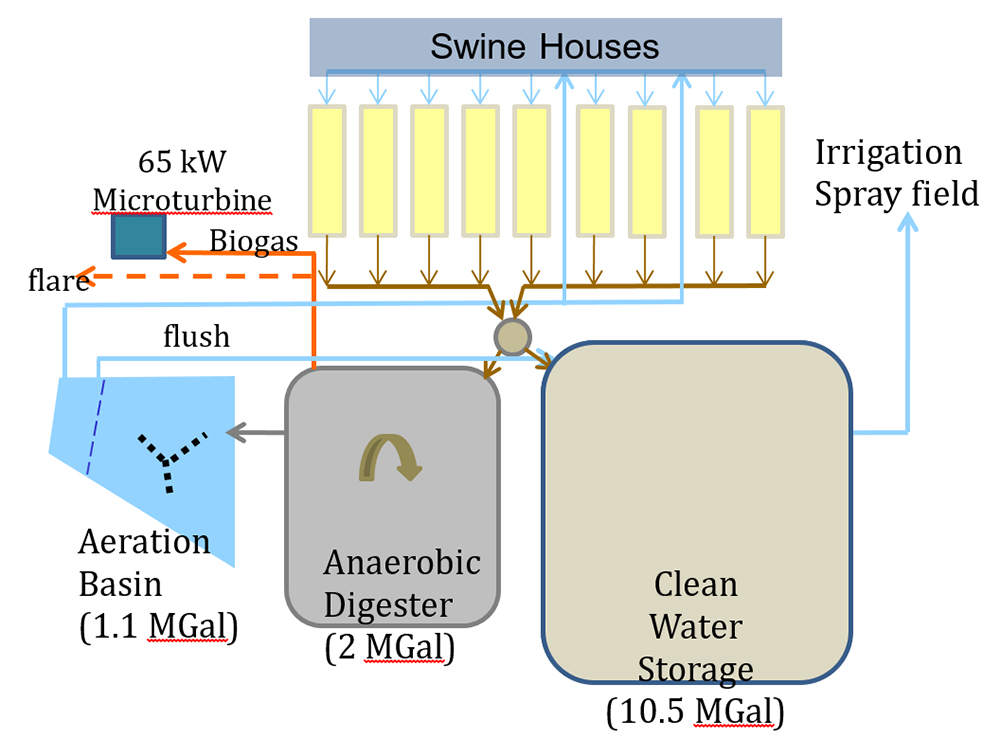 The general system works using two pits: a covered one for anaerobic digestion and an open aeration basin that pumps air into the waste in the pit. The biogas that is produced from the covered pit by bacteria is then moved to the conditioning skid. There, the biogas is cleaned and used to run a turbine and generate electricity (the excess is flared). The open pit uses a flushing mechanism to flush the barns and spray nearby fields, and will eventually allow for the water/waste in the pit to be used for agriculture. It is currently sprayed on a nearby field, but the nutrient content is too high to grow anything more than grasses. Eventually, over time, it will be used for cash crop agriculture so that the owner of the farm can make more money from his current land.

Some setbacks mentioned included the material, the cost and the extreme environment. Charles mentioned that the material they initially used to cover the pit was too large. Due to this, some of the material began to rip or create holes, resulting in the need to contract someone to patch it up. Charles explained the initial plan with many of the materials was to keep costs low; however, the replacement costs were not worth the initial savings.

Also, the environment at the farm is extremely corrosive due to the concentration of waste, so the gas conditioning system had to be replaced. Not many technologies are suited for this environment, and the project now uses steel as the best material for lasting in the harsh environment.

During this trip I further understood the systems that we are trying to implement. I had never been to an industrial farm before, I had never seen a hog lagoon and I had never seen an anaerobic digester swine waste-to-energy system. With a further understanding of the innovative system and the benefits, I think our team will be better able to explain the positive effects and how it actually works. That being said, I think we still need to look further into other technologies, specific to different areas, and understand the benefits and the drawbacks of each.