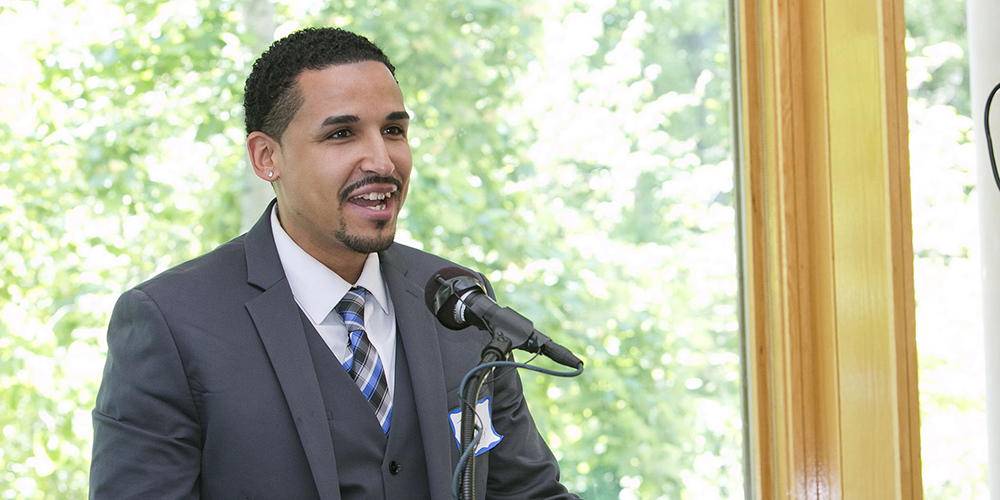 A team meeting at six o’clock on Friday morning doesn’t seem likely to attract many students. Not only it is early, but the meeting lasts at least two hours. And it’s every Friday. For a year.

But this is Duke, and leaders of a new Bass Connections project team, Improving Neurosurgery Patient Outcomes in Uganda, found themselves with far more applicants than they could accept. “People are really interested in this topic,” says Tony Fuller, a fourth-year medical student who helps lead the project.

Fuller is no stranger to teamwork. As a master’s student at the Duke Global Health Institute (DGHI), he received the Outstanding Student Award for his successful collaborations. Dr. Michael Haglund of the School of Medicine nominated Fuller for the award. “The definition of a team player is to sacrifice time and talents for others to make the whole better,” he wrote. “Tony has done that and more.”

When I got into medical school I knew exactly what I wanted to do.

Fuller and other DGHI students were instrumental in establishing Duke’s Division of Global Neurosurgery and Neuroscience (DGNN). It’s the first of its kind in the country.

Now at Duke’s School of Medicine, Fuller has been working with Dr. Haglund for almost five years. “When I got into medical school I knew exactly what I wanted to do: global health and neurosurgery,” Fuller says. Through DGNN, he’s involved in a twinning program between Duke and Mulago Hospital to build neurosurgical capacity in Uganda.

In the U.S., there’s one neurosurgeon per 88,000 people. Uganda, a country of 39 million people, has a far lower ratio. “There are four neurosurgeons at Mulago Hospital, one more in another place and two more at a private facility,” says Fuller. “That’s it for the whole country.”

From the start, involving students from many levels and backgrounds in DGNN’s work was a primary goal. “We wanted to get a whole spectrum of students,” says Fuller. “Our team at DGNN includes people at every level.” Therefore, proposing an interdisciplinary, multi-level Bass Connections team as an extension of this work seemed like a good fit. And many Duke students wanted to take part.

We wanted to get a whole spectrum of students.

“We had so much interest that we could only officially take so many,” Fuller notes. “There are six undergraduates on our Bass Connections team, plus two graduate students and a post-doc.”

Team members will look for gaps in the current program implementation; develop new ideas, approaches and research to address the areas needing improvement; and generate and share data to improve practices and help other countries.

The students are coming up with their own project ideas around strategic points, and in Uganda we’ll implement the final determinations.

“Our Bass Connections group started right away,” Fuller reports. “We’re going to Uganda for a month at the end of July. Before then we’ll have met about six or seven times to get up to speed. The students are coming up with their own project ideas around strategic points, and in Uganda we’ll implement the final determinations.”

This experienced student leader is enjoying sharing his passion with the new team members. “It’s been wonderful having the undergraduates in our group,” Fuller says. “They’re so excited, and they’ve already added new sides to the work we’ve been doing. We’re all just really excited.”

It’s been wonderful having the undergraduates in our group. They’re so excited, and they’ve already added new sides to the work we’ve been doing.

Looking ahead, he says he would love to remain at Duke for a long time to come. “Helping formulate DGNN has been a great experience, and I hope to continue with this work.”