Learning about Environmental Disasters and Injustices in Louisiana

By Elizabeth Allen ’19 and Laura Landes, Master of Environmental Management ’19

As part of our community partnership with the Alabama Center for Rural Enterprise (ACRE), students traveled with ACRE’s director Catherine Coleman Flowers to the Climate Reality Training in Atlanta, Georgia, in March. It was there that we first heard Lieutenant General Russel Honoré speak about environmental justice in Louisiana. Only days later he invited Ms. Flowers and our group to visit him to learn about his work in person. 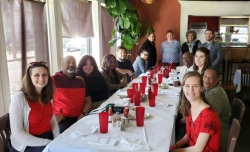 General Honoré has been involved in environmental justice issues in Louisiana for years, coordinating Hurricane Katrina Relief efforts in 2005 and later founding the Green Army to empower environmental activists in Louisiana to fight for their health and their families.

The Green Army continues to coordinate efforts to fight the spread of pollution by the many industrial plants sited along the Mississippi River. General Honoré connected us with many other environmental justice activists in the area, which was an incredible opportunity to hear their stories.

This is how we found ourselves driving through the area along the Mississippi River between New Orleans and Baton Rouge that 32 years ago was named “Cancer Alley” because of the disproportionately high rates of cancer deaths resulting from air pollution.

General Honoré told us stories about the smoking industrial plants that seemed to be everywhere we turned. Local activists in the parishes of St. John and St. James shared their experiences watching as industries came to the area and, as a result, the land where they grew up turned from honeysuckle, butterflies and beauty to air pollution, sickness and death. We learned about relatives lost to cancer and communities torn apart by a myriad of illnesses. We also learned about communities banding together to make change happen. Grandfathers, mothers and siblings inspired us with their tales of working together to protect their families from the dangers of air pollution. 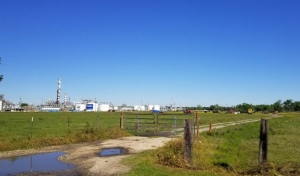 We also got the chance to tour New Orleans and see how it has changed almost 14 years after Hurricane Katrina devastated the Ninth Ward and battered the rest of the city. We saw the place where the levee broke, releasing the river to flood and destroy countless houses. We saw the empty lots where these houses used to be and the abandoned buildings that are remnants of a community destroyed. But we also heard from more than a dozen people working on various environmental justice issues to protect the city they love that is still recovering from a disaster more than a dozen years before. We met amazing people trying to rebuild the community with improved infrastructure, both green and gray, to counter the kinds of environmental dangers they face.

Our trip was filled with an amazing collection of stories about communities overcoming all the odds to join together and fight to protect themselves and the land they have lived on for generations, even though many would have left and never come back after Hurricane Katrina. They continue to fight for their rights to clean air, water and soil, even though they are constantly told that their lived experience is wrong and that their high rates of cancer and other diseases are not caused by the massive amounts of pollution from the industrial plants nearby. We are so grateful that they opened their doors to describe their challenges and successes and hope to support them in any way we can. We also plan to post interviews from the trip on the Environmental Justice timeline we are creating as a part of this project.