On the Japanese Tsunami

As a Japanese national, I have always been interested in the tsunami of 2011. In fact, the subsequent accident that occurred with the Fukushima nuclear power plant is what drew me to study energy: if one of the most highly developed countries cannot control its potentially hazardous energy supply, what will the future’s global energy mix be? When I found out that the United Nations Environment Programme had supplied our project with post-tsunami footage from Japan, I knew I wanted to sort through this material.

To my surprise, the main focus of the videos from Japan was debris management. When the earthquake occurred, I was living in London, and all I heard from the news, my relatives living in Japan, and the internet, were reports on radioactivity levels. Due to this, I did not expect the whole UNEP assessment to focus on debris management—something that initially seemed very trivial. However, the more I delved into the issue, I could see this seemingly small task of waste management had a large impact on the nation-island.

The tsunami had caused huge objects such as cars and houses to fly away, which caused enormous destruction. The amount of waste that had accumulated was much more than this area could possibly process. The debris from the Tohoku area of the country had the potential of being contaminated by radioactivity from the nuclear power plants. Consequently, no prefectures within Japan or countries wanted to accept the debris. Furthermore, because people were often left with nothing after the tsunami had swept their area, many valuable personal items and even bodies were left in the debris, making sorting through it an unpleasant yet important necessity. While doing this sorting, the Japanese aimed to sort the debris out by category of material in order to recycle it, but this again required much human labor and time. 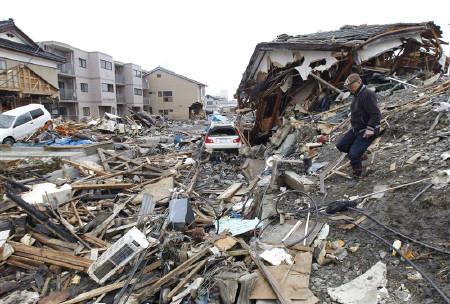 Viewing the UNEP footage and reading the UNEP assessment has made me aware that the main needs and problems that we think a community encounters after a disaster may not be the biggest ones. The results of a disaster linger a long time after the tragedy, and can be physical, economical, and even emotional barriers to progress.