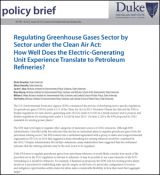 The Environmental Protection Agency has cited a policy brief by Duke researchers in a legal document accompanying the EPA’s final rule for the Clean Power Plan.

“Ten years ago the idea was to pass legislation in Congress to cap greenhouse gases, but that didn’t happen,” explains Brian Murray, Director of the Environmental Economics Program at the Nicholas Institute for Environmental Policy Solutions and Research Professor at the Nicholas School of the Environment. However, “the EPA had the authority and the mandate to regulate greenhouse gases, so the first industrial facilities they regulated were electric power plants, the largest source of emissions.”

That task proved relatively easy, because the sector produces just one thing. “But all the other sectors were really hard,” Murray notes. “There was no single output, and they were using all different technologies.”

The EPA settled on the petroleum refinery industry as the next sector to regulate under section 111(d) of the Clean Air Act.

So Murray and his colleagues asked themselves, What would the EPA’s options be? What would be the unique elements of the refinery industry to consider, and how much was learned from regulating electric power?

To tackle these questions, Billy Pizer (Professor in the Sanford School of Public Policy), Tim Profeta (Director of the Nicholas Institute for Environmental Policy Solutions and Associate Professor of the Practice in the Sanford School), Sarah Adair (Senior Policy Associate at the Nicholas Institute) and Murray formed one of the first Bass Connections in Energy project teams in 2013-14.

“The team worked really hard,” Murray recalls. “We were vigilant about meeting every week. The students were running the meetings and keeping on track.” 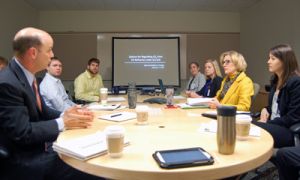 At the end of the year, the team gave a presentation and answered questions at the EPA in Research Triangle Park, arranged through the faculty leaders’ connections. Impressed, the EPA staff suggested that the team write a policy brief on the issue.

Even though the students were graduating by then, they kept going and wrote the brief, Regulating Greenhouse Gases Sector by Sector under the Clean Air Act: How Well Does the Electric-Generating Unit Experience Translate to Petroleum Refineries?, as well as a more detailed report, Regulating Greenhouse Gas Emissions under Section 111(D) of the Clean Air Act: Implications for Petroleum Refineries.

Last month the policy brief was cited in the EPA’s legal document supporting the final rule for the Clean Power Plan as part of an explanation of how to modify its Best System of Emissions Reduction (see page 123).

“The Bass Connections model really helped make this happen,” says Murray. “The faculty had sustained interest in moving this forward, and the students were really motivated.”

Allison Donnelly is now working as a clean energy consultant. “It was an excellent project team to be a part of and has continued to be beneficial to me as well,” she said recently. “I used my knowledge of 111(d) from the project to write a memo on efficiency in the Clean Power Plan in my third week on the job.”

To learn more, read a related article from the Nicholas Institute for Environmental Policy Solutions.