The DuiihDac Evolves: Changes to Design of the Off-grid Ice Maker

For readers that are new to the DuiihDac (Dual Input Intermittent Heat Driven Absorption Cycle), it is an off-grid ice-maker that we (a group of three Pratt and four Trinity seniors) are designing for off-grid storage of vaccines and perishable food. Since our last update, the team has made several revisions to the prototype’s refrigeration cycle and nailed down design specifications.

Our previous blog post stated that we were going to rely on ammonia as the refrigerant and calcium chloride as the absorbent. Since then, we decided that the corrosive properties of ammonia severely limited our choice in materials for the condenser and evaporator. In addition, while we had originally thought that activated carbon would be too expensive to use as an absorbent, we found that activated charcoal from coconut husks shells is porous affordable enough to function as an efficient absorbent and meet the constraints of our budget. Thus, we reverted back to our original plan to use ethanol as the refrigerant and activated carbon as the absorbent.

Upon making this decision, we were able to delve into the specifics of our design. We calculated the amount of refrigerant and absorbent we would need to reach the vaccine storage temperature ( 2°C and 8°C), informing our design of the solar absorber. From there, we also calculated the amount of copper piping we would need for our evaporator and condenser. Using SolidWorks, we confirmed that the steel solar absorber base would be able to hold the anticipated weight of the activated charcoal. 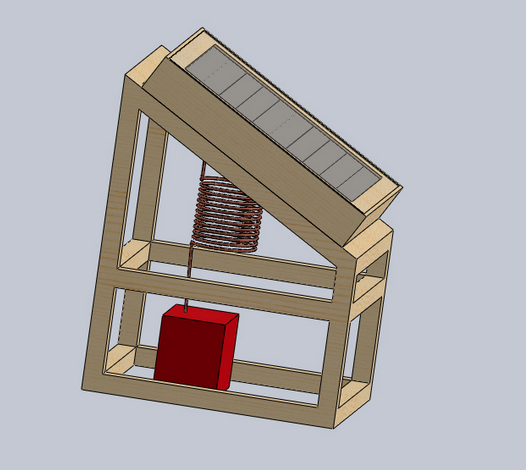 Lastly, we have begun to design our business plan and assess the anticipated environmental impact of the DuiihDac. As of now, we expect to pay $1,400 for the prototype. If production were to be scaled up to 200 units, each unit would cost approximately $400. While an in-depth lifecycle analysis has yet to be completed, we expect the DuiihDac to be less environmentally harmful than the alternative mode of delivering the same service – a kerosene powered refrigerator.

With the SolidWorks model built, we are close to the point where “all systems are go”. This month will be devoted to purchasing more materials and the final assembly of the prototype.