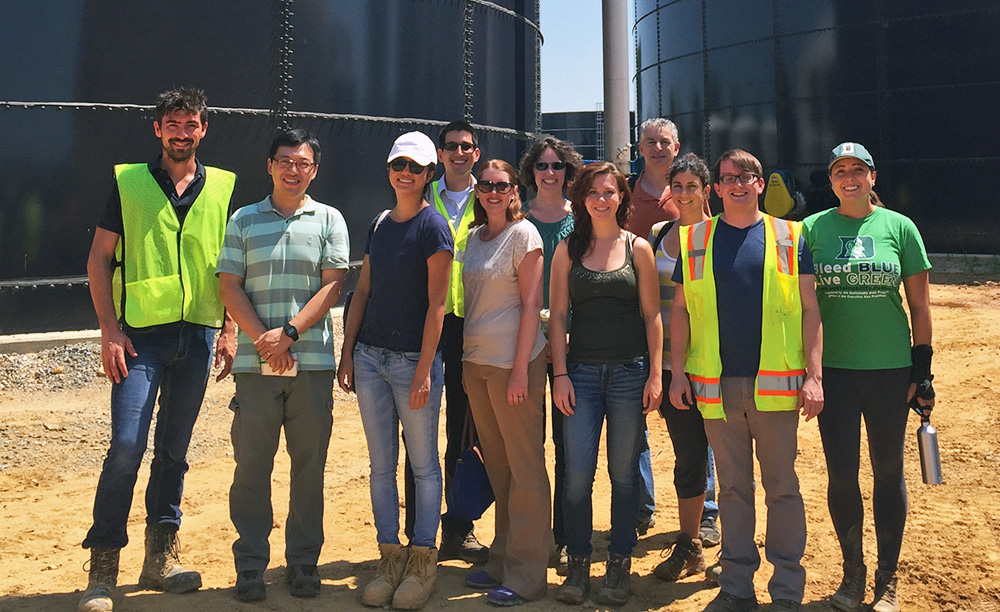 On a hot and humid August morning, an unlikely group gathered to take a trip to visit a commercial food waste digester in Charlotte, NC. The group of ten included Duke staff, faculty and students from across a variety of disciplines and fields, brought together by the Duke Carbon Offsets Initiative to tour the digester and engage with this insightful experience through a wide variety of academic and professional lenses. Our backgrounds ranged from engineering professors and Ph.D. students to staff from Sustainable Duke to undergraduate students in Trinity, each lending a unique and valuable perspective.

The digester is managed by Austep, an Italian company that has over 250 food digester plants all over Europe. Our gracious tour guide, Daniele Chiodini, the vice president of sales, walked us through the entire process on paper before taking us outside to see the actual plant. His background in engineering allowed him to answer the multitude of questions the engineers in the tour group volleyed at him, while his current position also enabled him to answer the policy, financial and other miscellaneous questions that the non-engineers had.

Although we had different backgrounds, we were united by a common interest in the environment and sustainability. This trip was made possible through funding by the 2015-2016 Bass Connections in Energy Feasibility Study for a Campus Digester project. Although the conclusion of the Bass Connections project was that there was not enough food waste to make an on-campus digester a cost-effective project, this trip showed us what a large-scale digester would look like. Food waste from various corporations will enter the 5.2 MW capacity digester. Under anaerobic conditions, bacteria will digest the food, creating fertilizer and methane in the process. Under normal circumstances, that waste would be put into a landfill, where the methane would be released over time into the atmosphere as the waste decomposes. Since methane is up to 25 times worse than carbon dioxide as a greenhouse gas, burning the methane to convert it into carbon dioxide is more environmentally sustainable. Furthermore, the energy created from burning the methane can be used to generate electricity, which can then either be used by the plant or fed into the grid. Additionally, the thermal energy generated is used to dry out the fertilizer so it can be sold.

After the tour, we debriefed over lunch and discussed what each of us had learned and how it related to what we were doing on campus. The engineers were extremely excited with the technical aspects of the plant and, in particular, the innovative technology developed specifically for the digester. From a policy perspective, it was extremely interesting that the plant was based in Charlotte, the largest city in North Carolina, instead of in a surrounding, more rural county. During the tour, Daniele touched on some of the financial aspects of the project, highlighting the policies that made this project financially feasible and slightly different from its European counterparts. As educators, many of the faculty and staff were enthusiastic about the research and development and future projects that Austep was establishing, perhaps in partnership with Duke students as interns or research assistants.

The beauty of Bass Connections is that it brings together people from all backgrounds and stages in life to bring their unique perspectives to an interdisciplinary project. Even with something as simple as this one-day field trip consisting of a group whose members largely didn’t work on the project during the academic year, that interdisciplinary aspect was still evident and helped facilitate a successful, informational and educational trip.