Opioid addiction is an increasingly urgent health problem in the United States. Since 1999, deaths from prescription opioid pain relievers have quadrupled.

This summer, students on a Bass Connections project team are linking with many community partners to better understand the problem and take steps that could lead to saving many lives.

The Stemming the Opiate Epidemic through Education and Outreach team worked in partnership with the North Carolina Harm Reduction Coalition to assemble naloxone kits that contain a prescription medication to reverse opioid drug overdose. As shown in the picture, the team assembled 624 kits that will be distributed to those most at-risk for an overdose, free of charge. 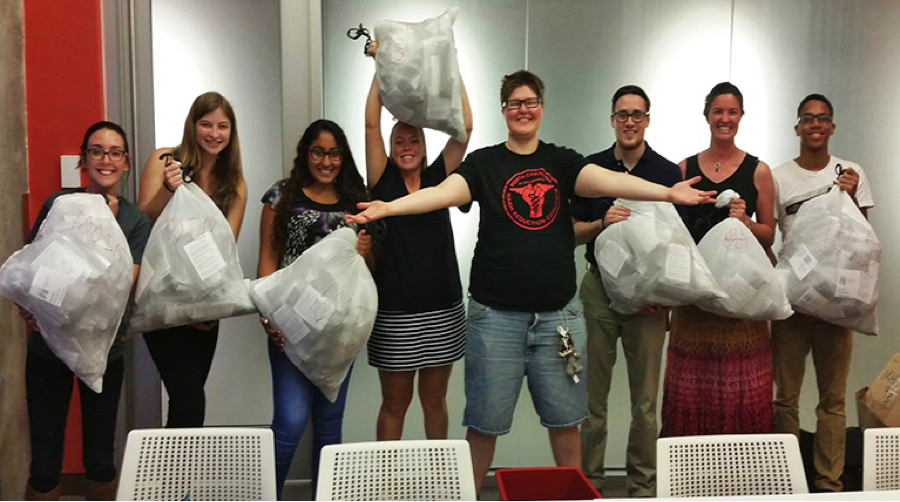 Loftin Wilson is an outreach worker for the North Carolina Harm Reduction Coalition. “I have been working with NCHRC for about six years now,” he states. “I started as a volunteer, then a part-time worker and now a full-time outreach worker. I love harm reduction because where I am from in a rural part of North Carolina, drug overdose was a common thing. I believe that drug users should be able to be provided with clean and safe needles.”

When the team started its work this summer, it was illegal to hand out clean needles to drug users. On the day I visited the team, a bill to legalize needle exchange was moving through the state legislature, and team members were calling state representatives to gain support for the bill. As of July 1, the bill had successfully passed the NC House and Senate, and was awaiting the governor’s signature to become law. The team was glad to be a small part of this big success for North Carolina.

This Bass Connections project team will continue through the 2016-2017 academic year. Team members spent their summer session gaining an understanding of the nature of the opiate misuse problem in the local community, learning principles of community engagement and identifying the relevant stakeholders. This process of information-gathering inspired many ideas, which the team will begin working on in the fall.

Written by Nathaniel Waddell, a Spring 2016 graduate of North Carolina Central University who is working as a communications intern for Bass Connections at Duke University. Originally from Wilmington, North Carolina, he majored in mass communications with a concentration in broadcast media. He is hoping to continue gaining experience in this field before applying to graduate programs.