Are People Well Calibrated When It Comes to Emissions from Appliance Use and Food Consumption?

Our team, which is guided by the project title “Goals and Collective Efficacy: Routes to Energy Saving”, is developing a number of exciting experiments that are described below. The general theme for all of our work is how to present information about energy savings from engaging in efficient actions.

Moving forward, I want to focus on energy from food production, because while people can see a light bulb or computer using energy, people do not think about all the energy used to produce the piece of chicken on their plates. To analyze how we can convince individuals to eat fewer high emitting foods, I would like to test two things. The first is the perceptions of the amount of energy usage and carbon emissions from each step of the food production processes compared to the actual amounts. Testing this will show which aspects of food production need to be emphasized when asking individuals to consume fewer high emitting foods. The second is the effects meat and fish labeling have on consumers’ choices. This will help show how consumers respond to specific kinds of words and labels when they are compared side by side.

Through my research, I intend to answer the following questions: (1) Do people react more positively to one or to multiple reasons for taking an action? (2) Is it more effective for multiple reasons to be in same domains or different domains?

In my first study, people were given either one/two of the same/mixed egotistical/environmental reasons for changing their diet to a meat-free diet. Egotistical reasons included Health and Appearance reasons while environmental reasons included Animal Welfare and Climate Change. After these reasons were presented, the perceived persuasiveness of the reasons given and individuals’ behavioral intent to change their diet was measured. 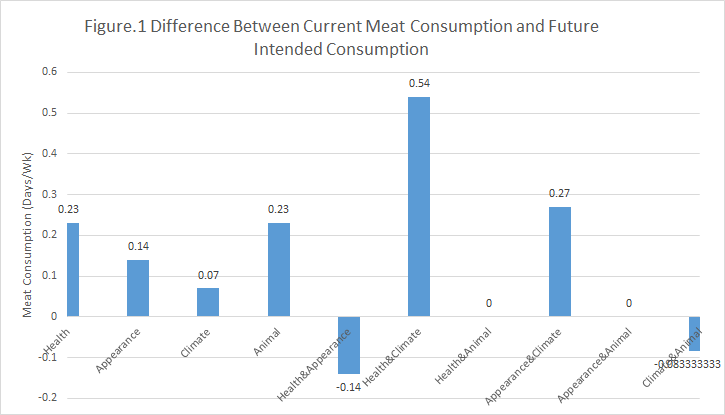 In order to improve this survey design, I intend to increase the perceived persuasiveness of reasons and make reasons within the same domain more similar to each other. Additionally, I will include a “cost” component, where statistical cost (in terms of money or CO2 emitted) is included in the reasonings given. I will also shift my study to a different domain, namely, light-bulbs.

I examined the effect of manipulating the size of two variables in relation to the environmental benefits of the vegetarian lifestyle. Previous studies have indicated that people are swayed by larger numbers more so than they are swayed by small numbers that demonstrate the same information. To explore this effect further, I described the benefit of being vegetarian while changing the size of the numbers I presented based on two variables: time and number of people. 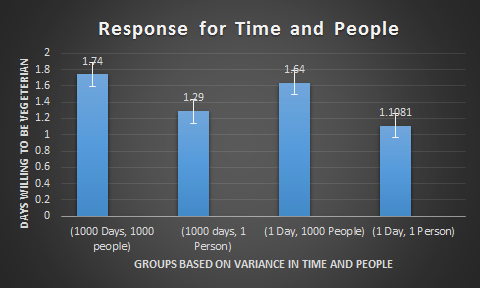 One difficulty we encountered in the survey was that by taking the response variable in days we didn’t have a wide range of variations. Instead of days we could ask for number of meals. Another aspect that we would like to explore is people’s willingness to give up certain high carbon producing foods such as red meat or cheese. In addition, we would like to focus on the positive peer pressure effect that  the effect of the “1000 persons frame”  seems to show. We would like to see ways to use the idea of peer group vegetarian to encourage actual behavior change.  Finally, the idea of the large number effect in relation to peer behavior could apply to other aspects of energy use. We plan to run another study focusing on willingness to drive less or use less electricity and to see whether there is also an effect for aggregating over potential collective behavior.